A Month in Pictures: November 2020 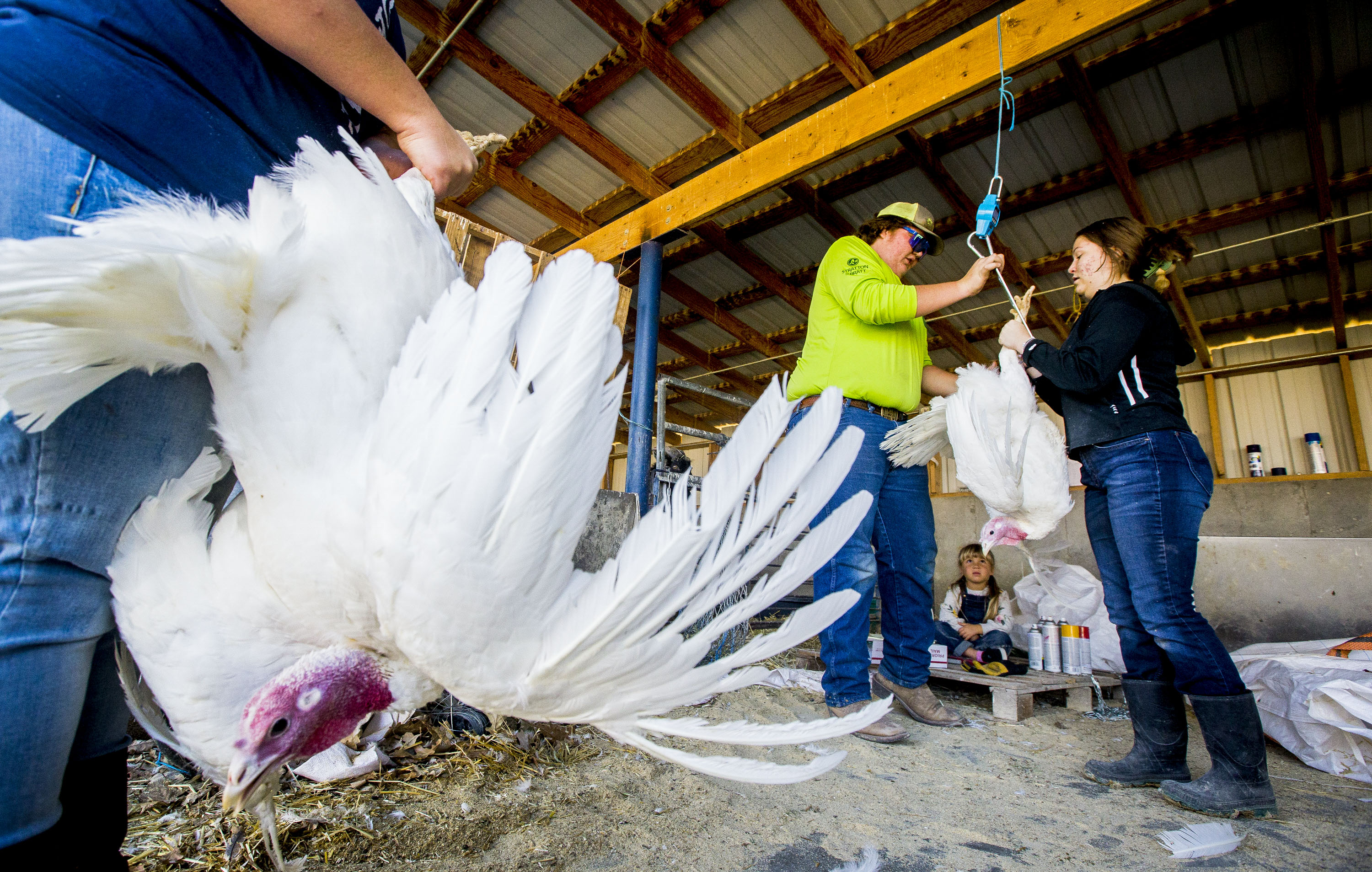 Maple Mountain High School senior Jaxon Corona, left, helps sophomore Ashley Ferrell weigh a turkey as students and their teachers prepare turkeys to be processed at the school’s animal lab in Spanish Fork on Monday, Nov. 16, 2020. The Utah State Junior Turkey Program aims to give kids the experience and life skills that comes with raising an animal from start to finish in a relatively short amount of time, without needing to spend a lot of money or requiring sophisticated equipment. Read more from this Monday Close-Up here: provodh.com/mbej5

Most obviously, a presidential election was held in what's been a remarkably turbulent year for politics. Besides ballot headliners, loads of state and county issues were also posed to residents of Utah County and Utahns in general. The before, during, and after of the election was a wild time in and of itself, but high school fall sports and the following player of the year portraits, continual COVID coverage (including a statewide mask mandate and resulting reactions), developments concerning two different photo stories I was working on, and an influx of freelance work all also crammed itself into November.

Regarding the two photo stories, one garnered some fun experiences in reporting and photographing it. The Monday before Thanksgiving, my photo essay profiling the Utah State Junior Turkey Program ran in the paper (for more details on it, click the link in the photo caption above). From what I choose to do Monday Close-Ups on, I think it's safe that people can assume I especially enjoy photographing on farms and in the countryside. While working on this project I learned the general ins and outs of raising a Thanksgiving turkey from egg to table, including what goes on inside the poultry plant where the program's turkeys are processed. Having never been to a plant where livestock were slaughtered and packaged, getting to see the entire process firsthand was an education and left me with a more thorough understanding of what it means to be a meat consumer. The other photo story was one that I've been working on for most of this year, and it had a heartbreaking turn. More on that to come in my December photo blog post.

November also marks the start of "The Most Wonderful Time Of The Year" (as singer Andy Williams would say). Thanksgiving kicks off the holiday season and soon begins the last month before a new year. As always, December feels like a mad dash to close out the year before starting anew in January, and I am certain this December will be no exception. 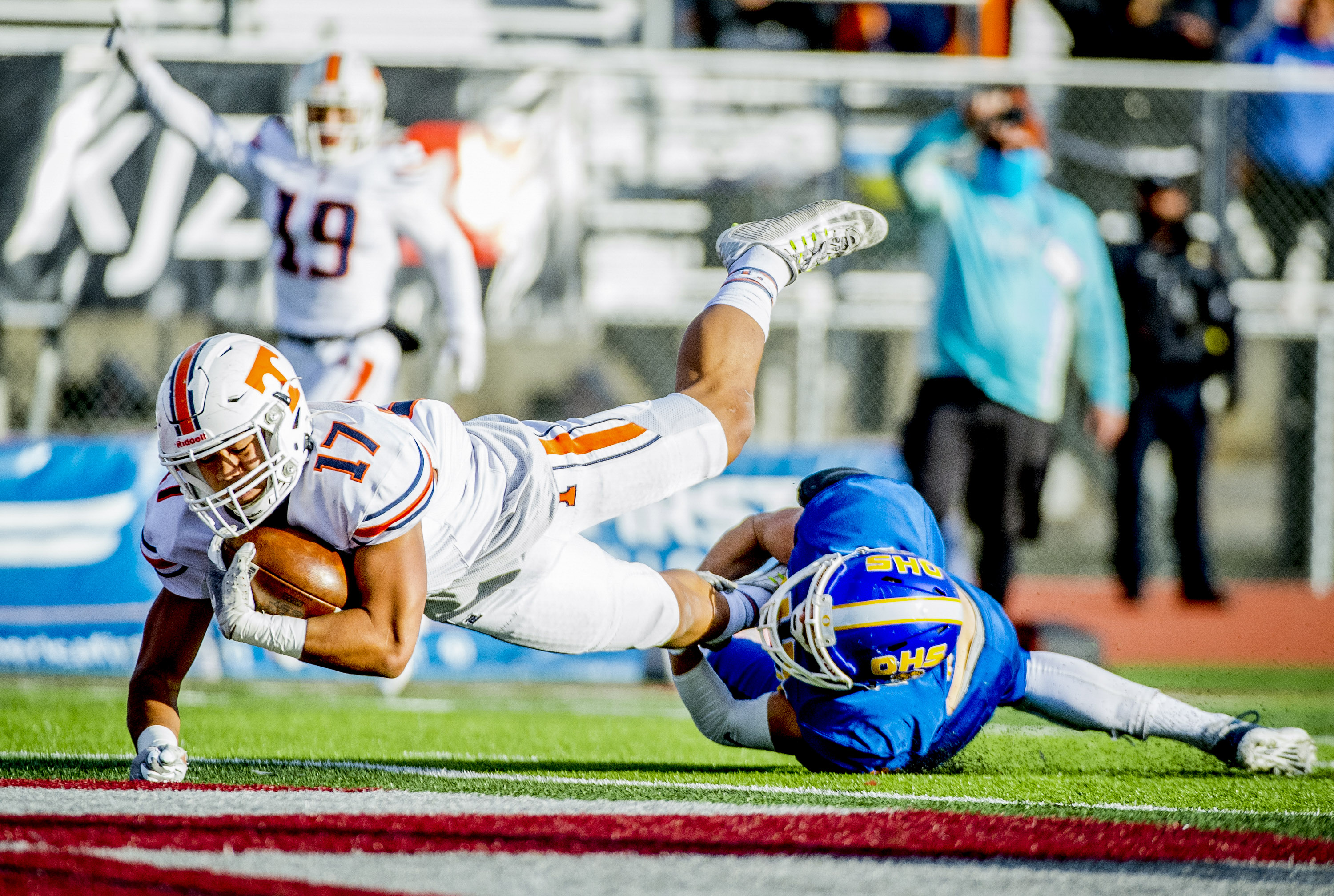 Timpview fullback Ammon Key (17) is tackled in the end zone for a touchdown by Orem defensive end Jaycob Amodo Tolua-Olah (17) after Key made a deep catch and run during the 5A state championship game between the Orem Golden Tigers and the Timpview Thunderbirds held at Cedar Valley High School in Eagle Mountain on Friday, Nov. 20, 2020. 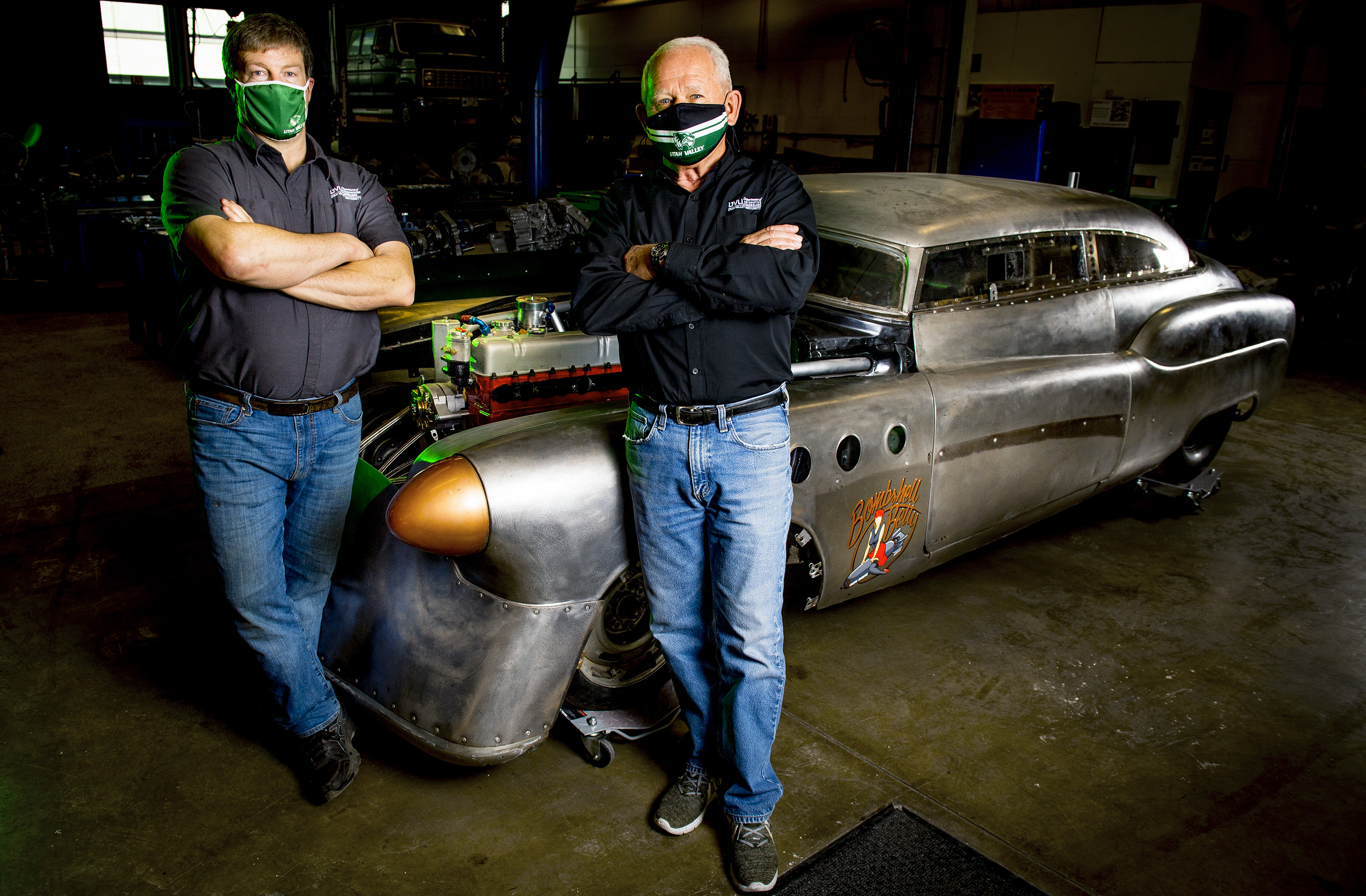 Todd Low, left, director of the Wolverine Racing Team and a Utah Valley University automotive professor, and Jeff Holm, a professional in residence with UVU’s Department of Transportation Technologies, pose for a portrait with an in-progress 1952 Buick Roadmaster at UVU in Orem on Monday, Nov. 16, 2020. The two, along with a group of UVU students, are rebuilding the vehicle with a goal of getting it able to reach 200 mph. 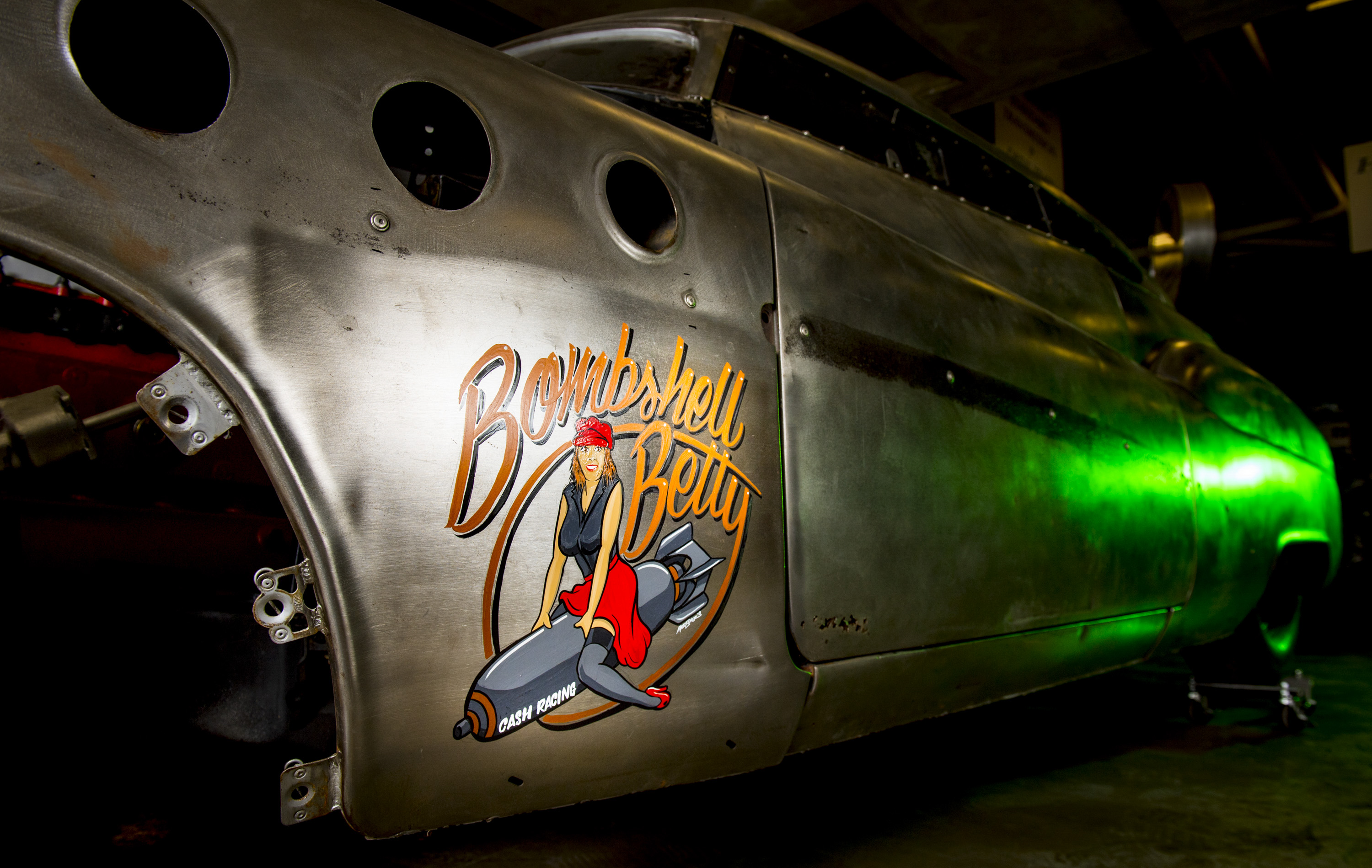 The side of an in-progress 1952 Buick Roadmaster awaits further work at Utah Valley University in Orem on Monday, Nov. 16, 2020. 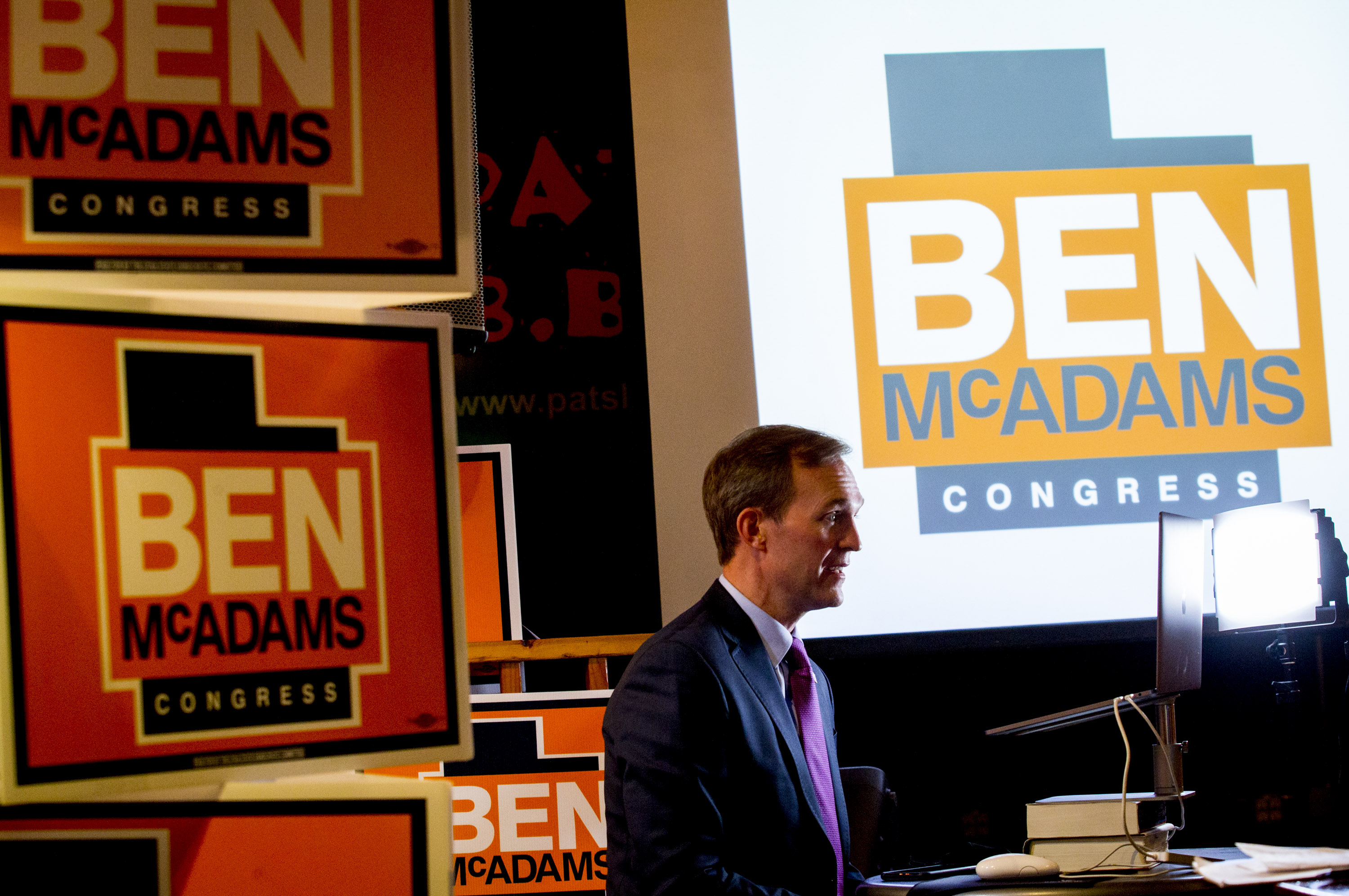 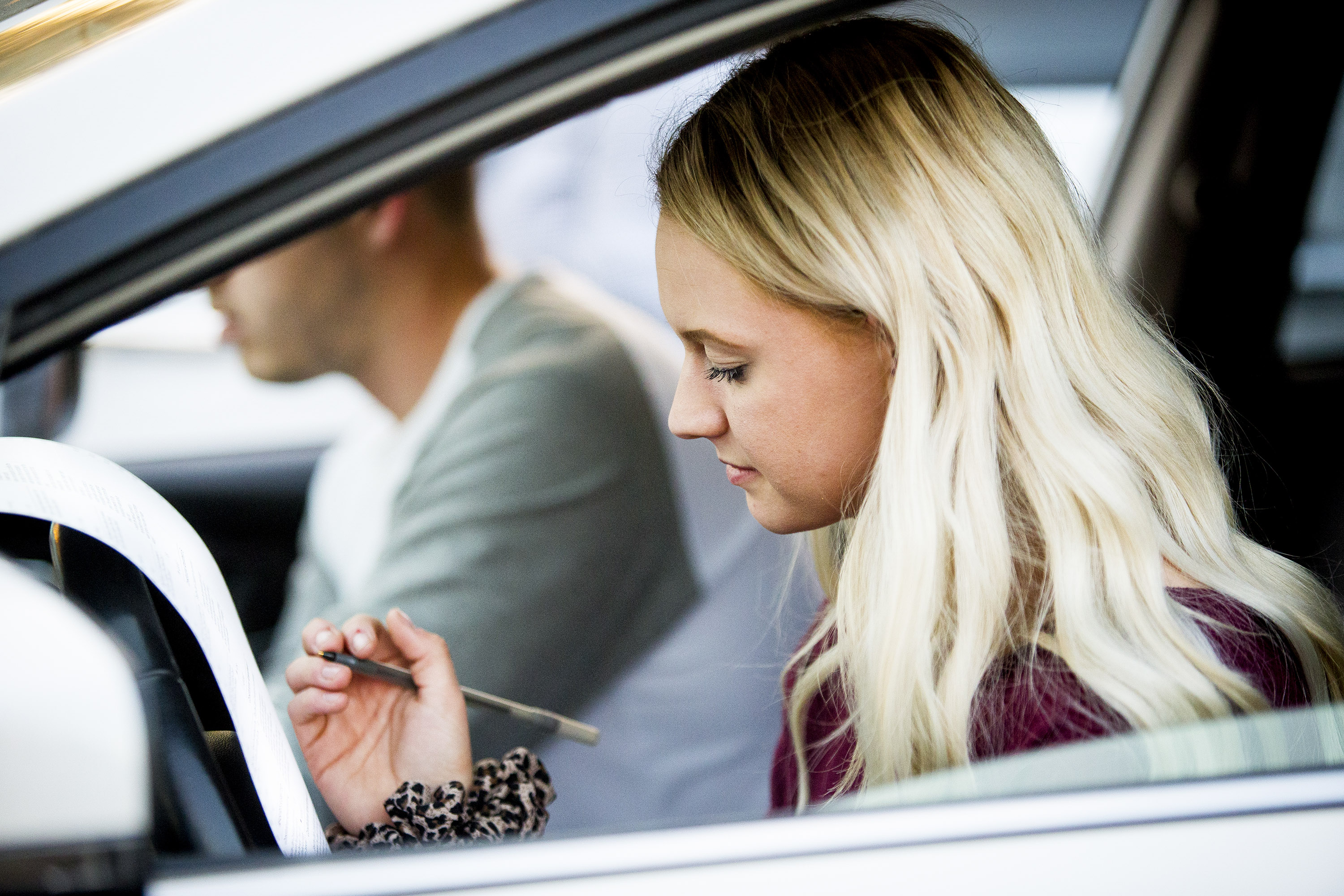 Tasha and Ty Coy, both of Orem, fill out their ballots in their car at a polling place held at the The Church of Jesus Christ of Latter-day Saints’ church in Lehi on Tuesday, Nov. 3, 2020. 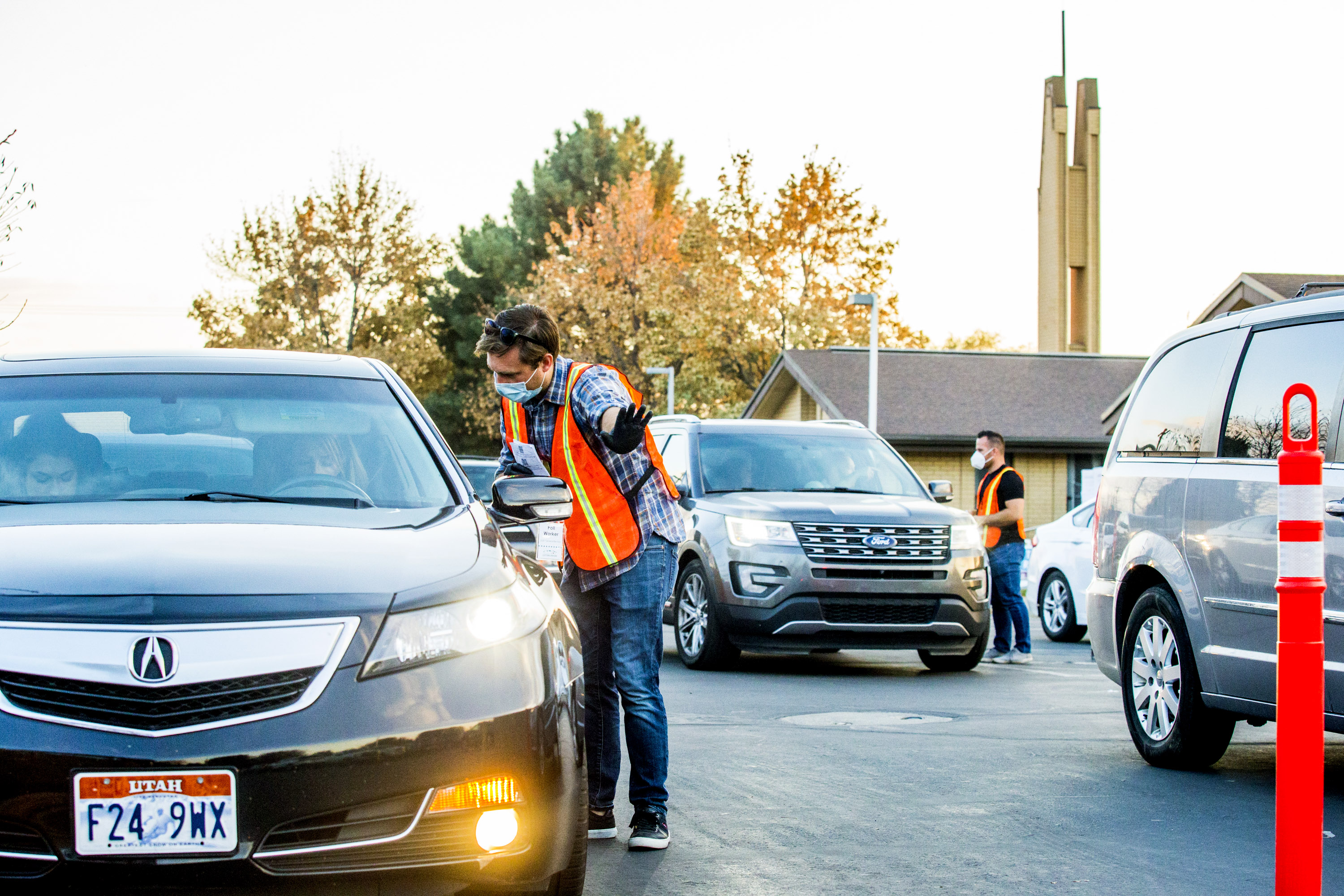 Poll worker Marshall Bezzant directs voters at a polling place held at the The Church of Jesus Christ of Latter-day Saints’ church in Lehi on Tuesday, Nov. 3, 2020. 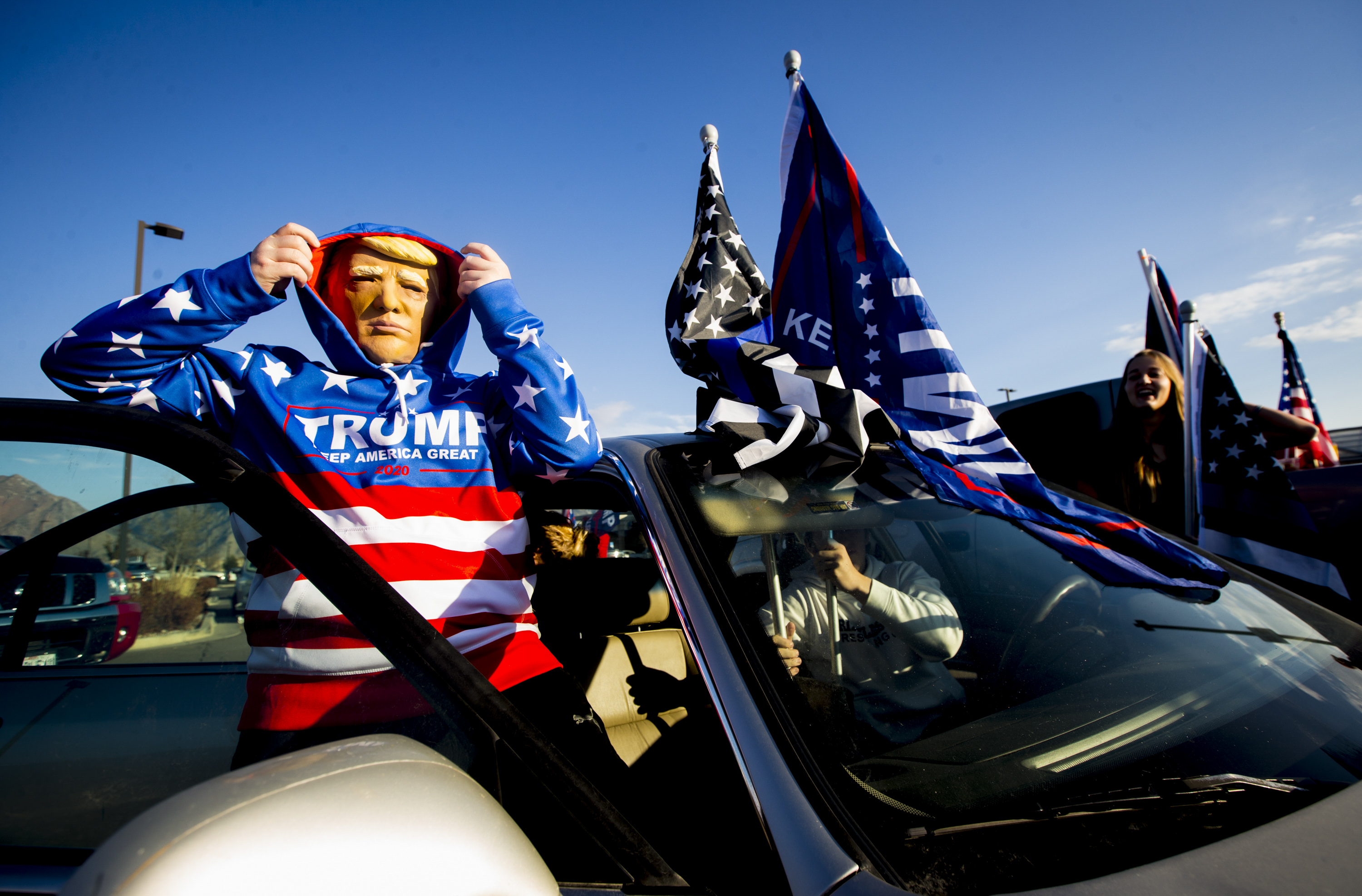 Cole Wright dons his hood as he sports a Donald Trump mask while supporters of President Trump gather for a Trump train vehicle parade in the parking lot of Smith's Food and Drug in Lehi on Tuesday, Nov. 3, 2020. 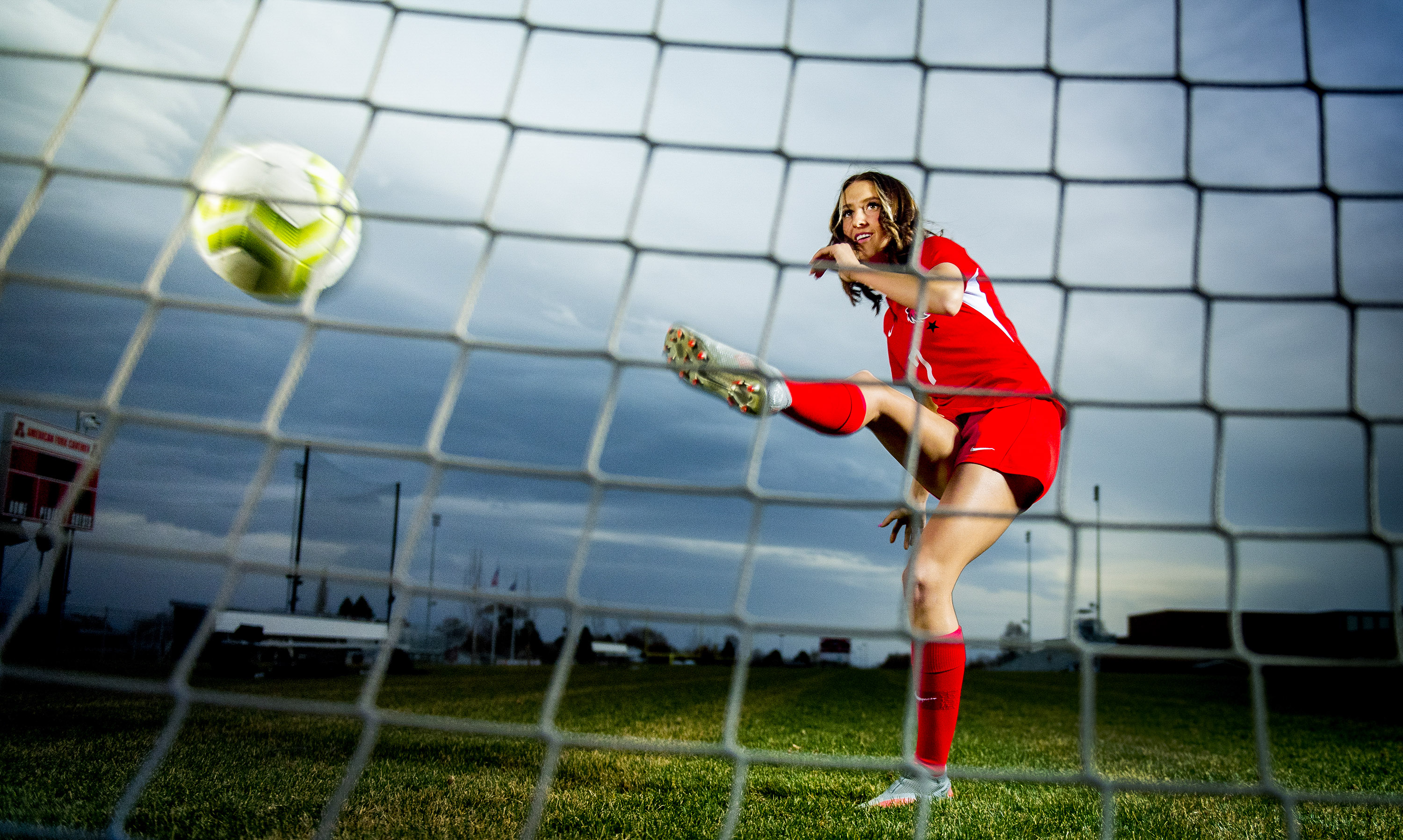 American Fork forward Addie Gardner kicks the ball as she poses for a portrait at American Fork High School on Wednesday, Nov. 18, 2020. A senior, Gardner has been chosen as the Daily Herald’s 2020 All-Valley Girls Soccer Player of the Year. 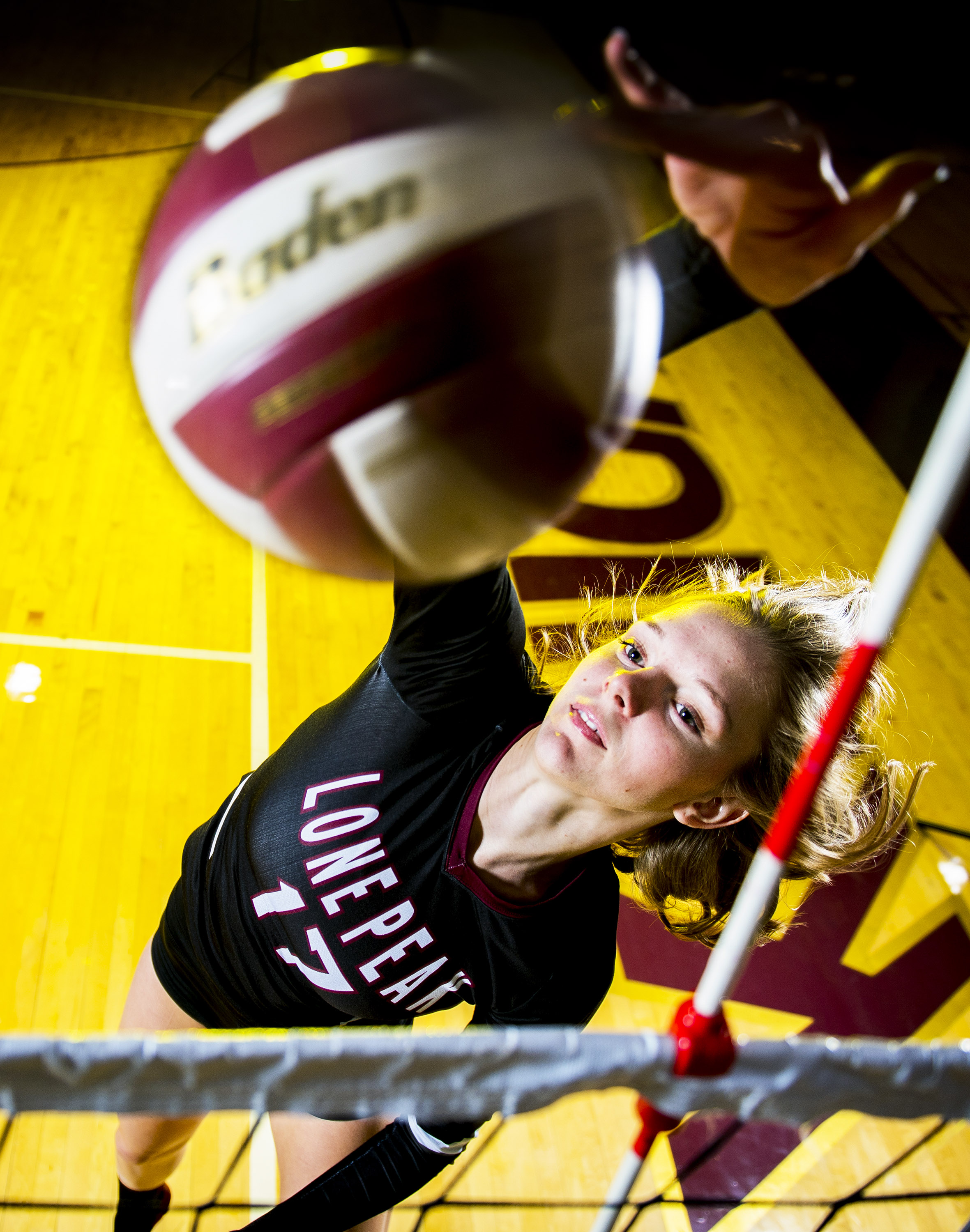 Lone Peak outside hitter Lauren Jardine spikes the ball as she poses for a portrait at Lone Peak High School in Highland on Thursday, Sept. 19, 2020. A senior, Jardine has been chosen as the Daily Herald’s 2020 All-Valley Volleyball Player of the Year. 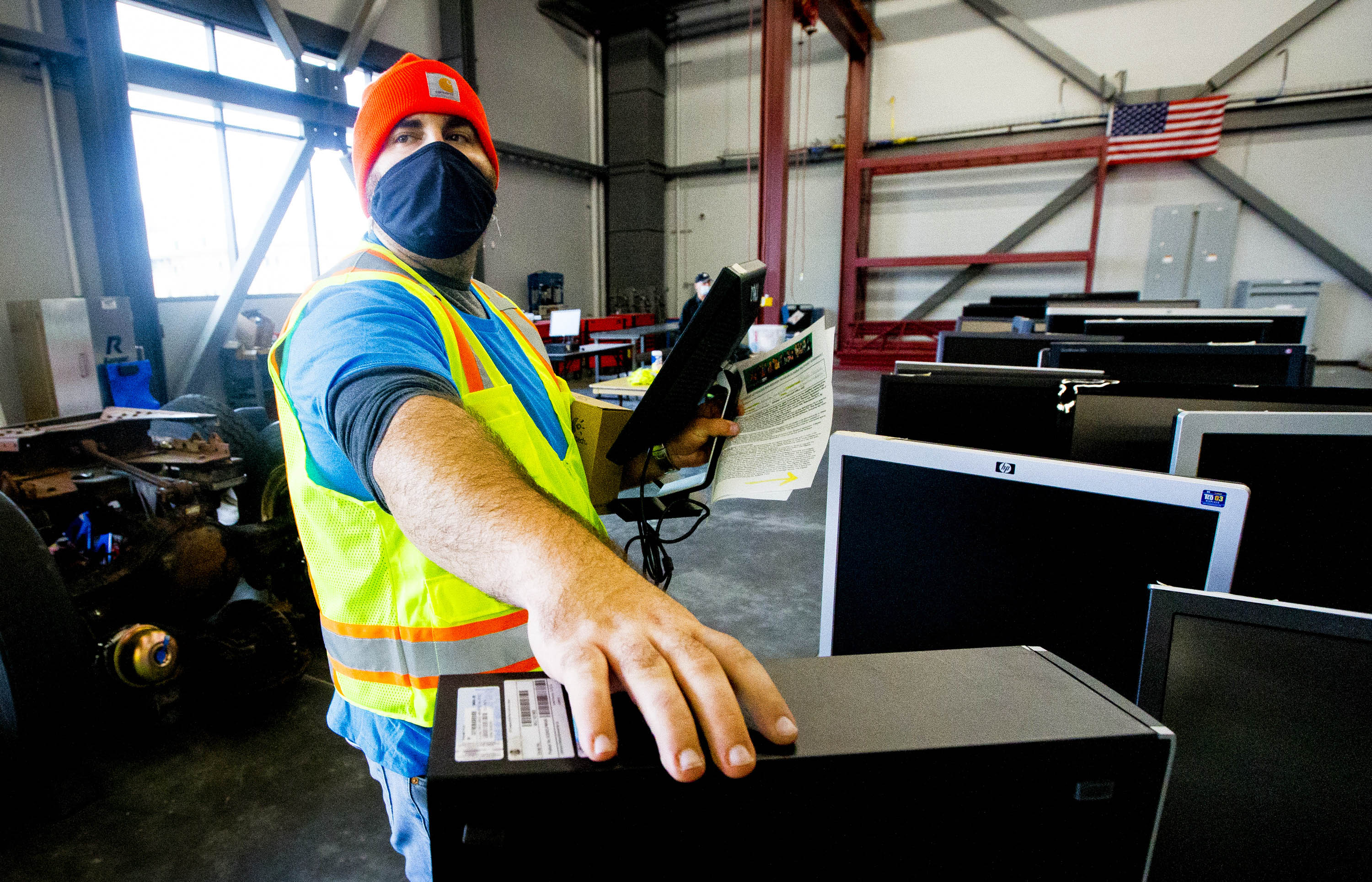 Volunteer DJ O’Connor, with Micron, prepares to carry computer components to a student’s family as part of a donation program for Alpine School District students organized by Mountainland Technical College, Micron and Computers for Kids held at MTECH’s Lehi campus on Friday, Nov. 6, 2020. 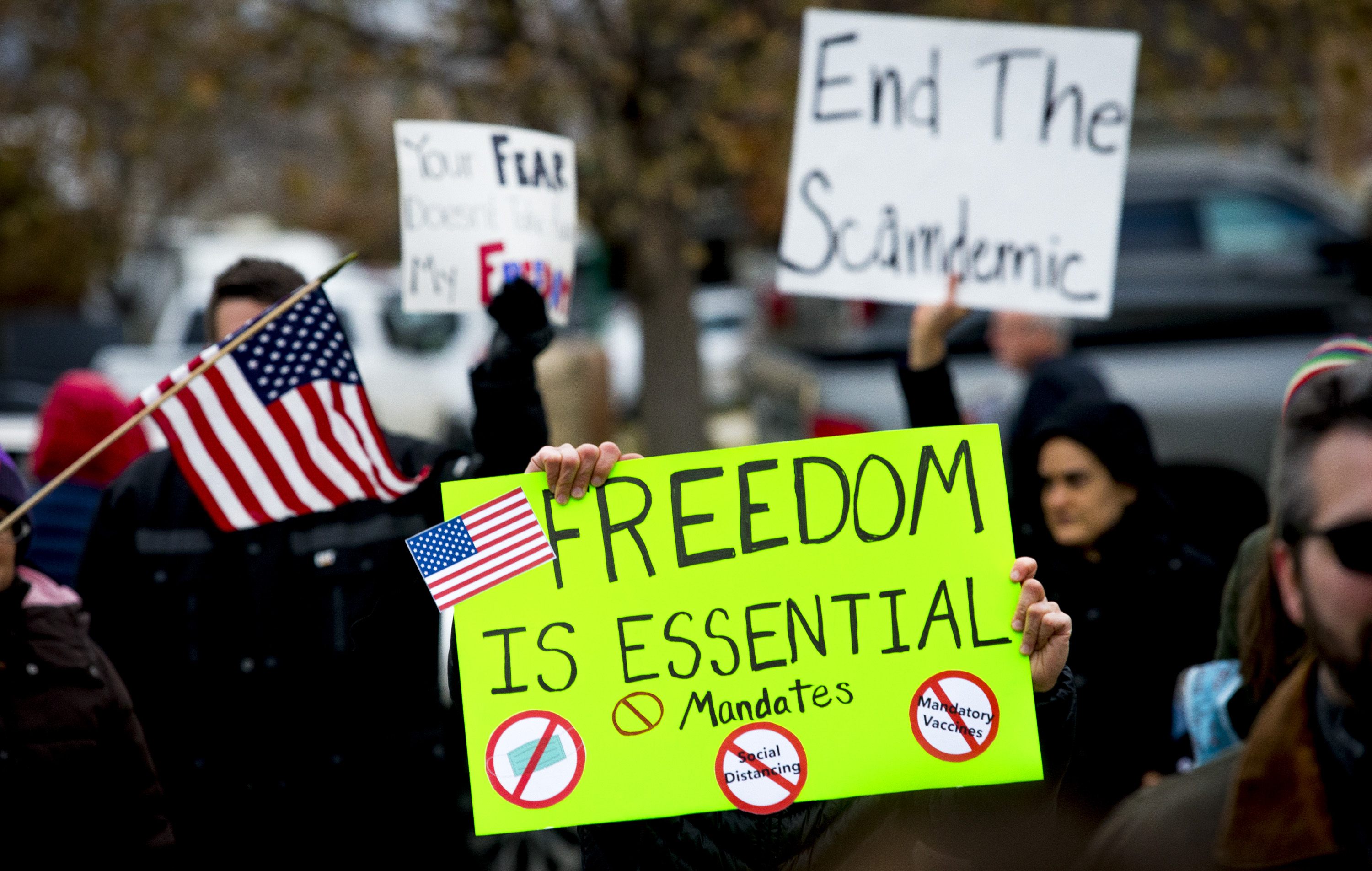 Protesters hold signs as they chant during a protest held outside of Gov. Gary Herbert’s home in Orem on Monday, Nov. 9, 2020. The anti-mask protest was held in light of the governor’s new COVID-19 restrictions and state of emergency he issued on Sunday night. 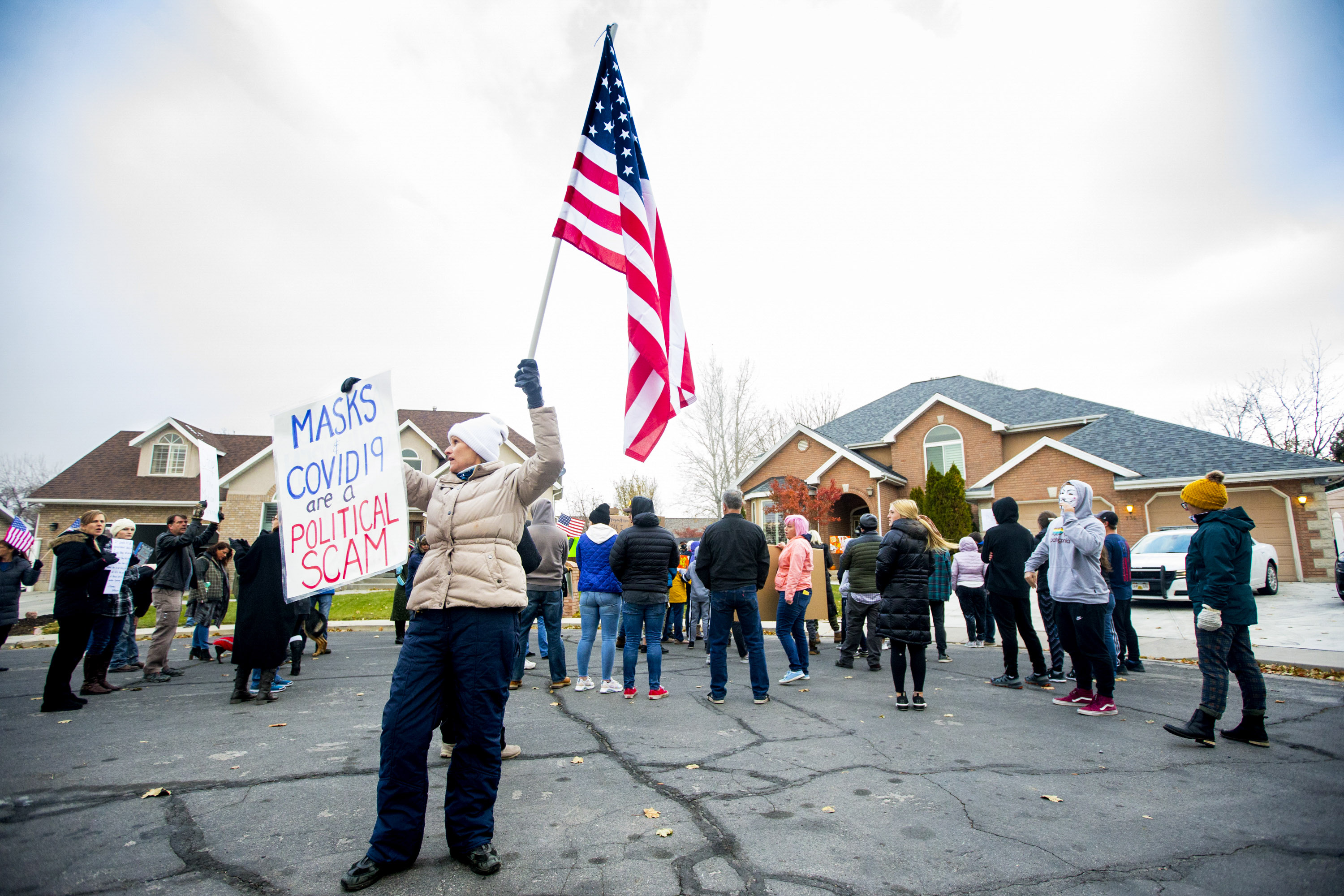 Mayble Jones, of Provo, holds a flag and sign as she chants with other protesters during a protest held outside of Gov. Gary Herbert’s home in Orem on Monday, Nov. 9, 2020. The governor’s new COVID-19 restrictions included a statewide face mask mandate. 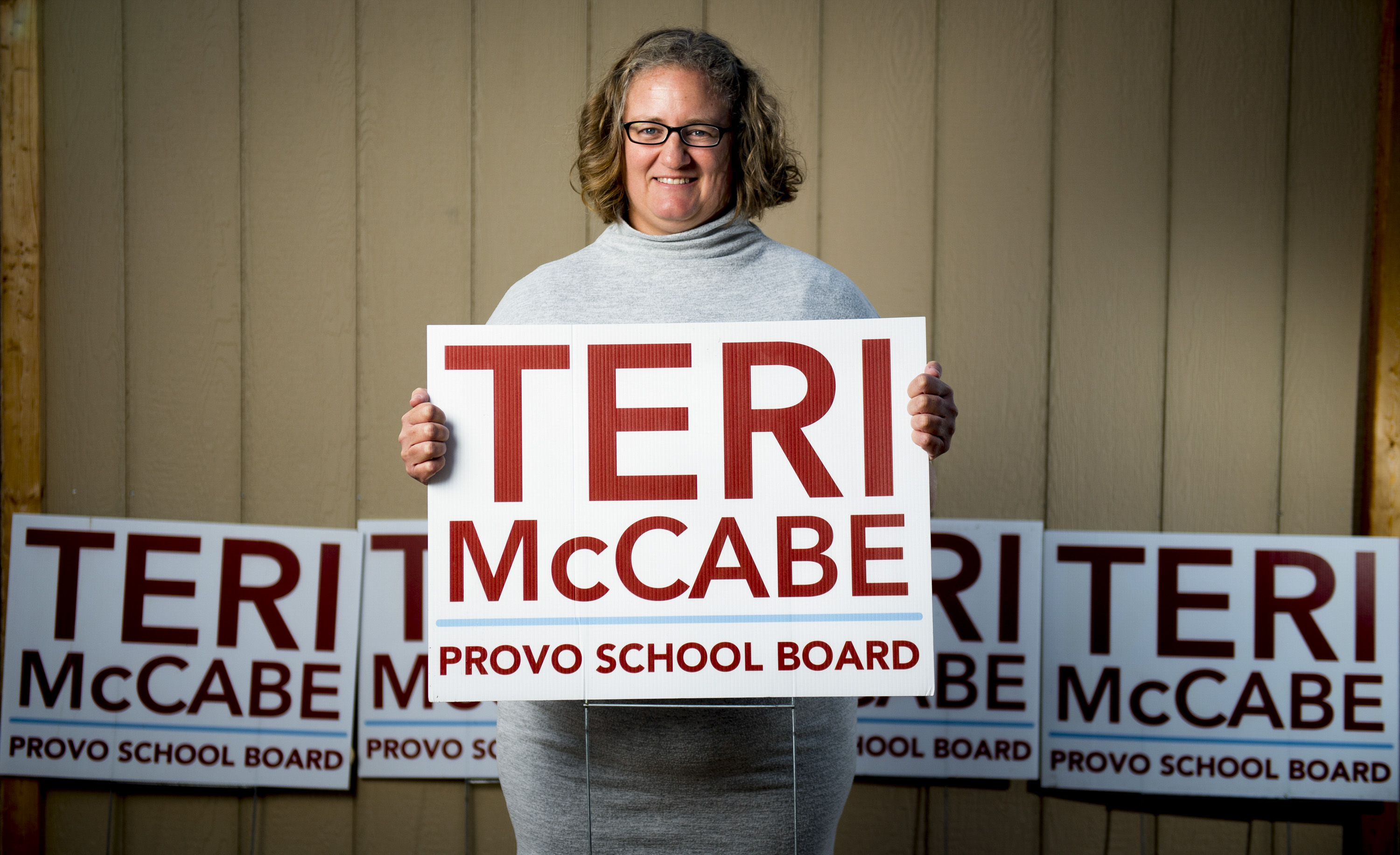 Teri McCabe, a candidate for Provo City School Board District 5, poses for a portrait outside of her home in Provo on Tuesday, Nov. 10, 2020. McCabe beat out incumbent Julie Rash by a margin of 171 votes. 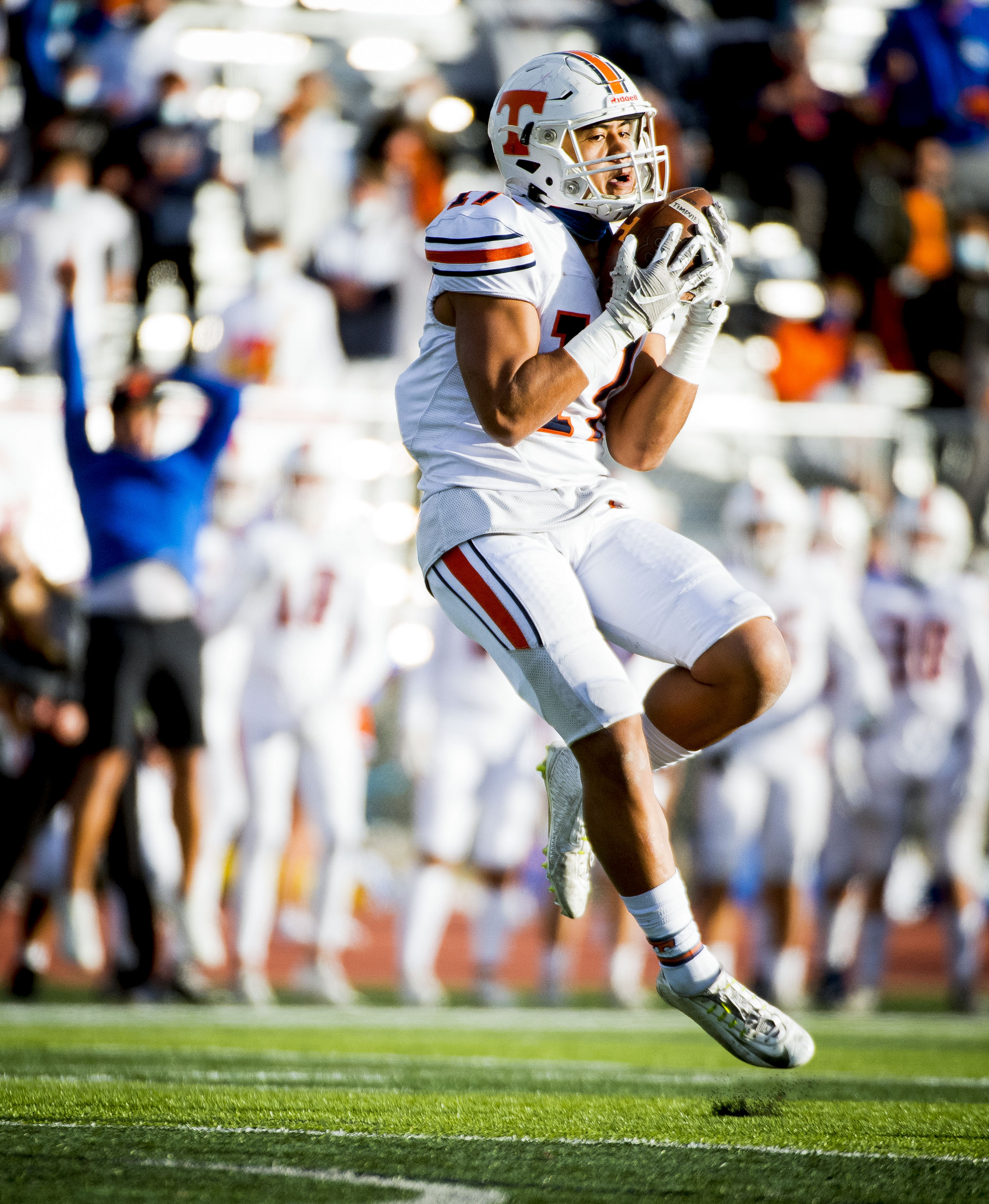 Timpview fullback Ammon Key (17) makes a deep catch and eventually runs the ball into the end zone for a touchdown during the 5A state championship game between the Orem Golden Tigers and the Timpview Thunderbirds held at Cedar Valley High School in Eagle Mountain on Friday, Nov. 20, 2020. 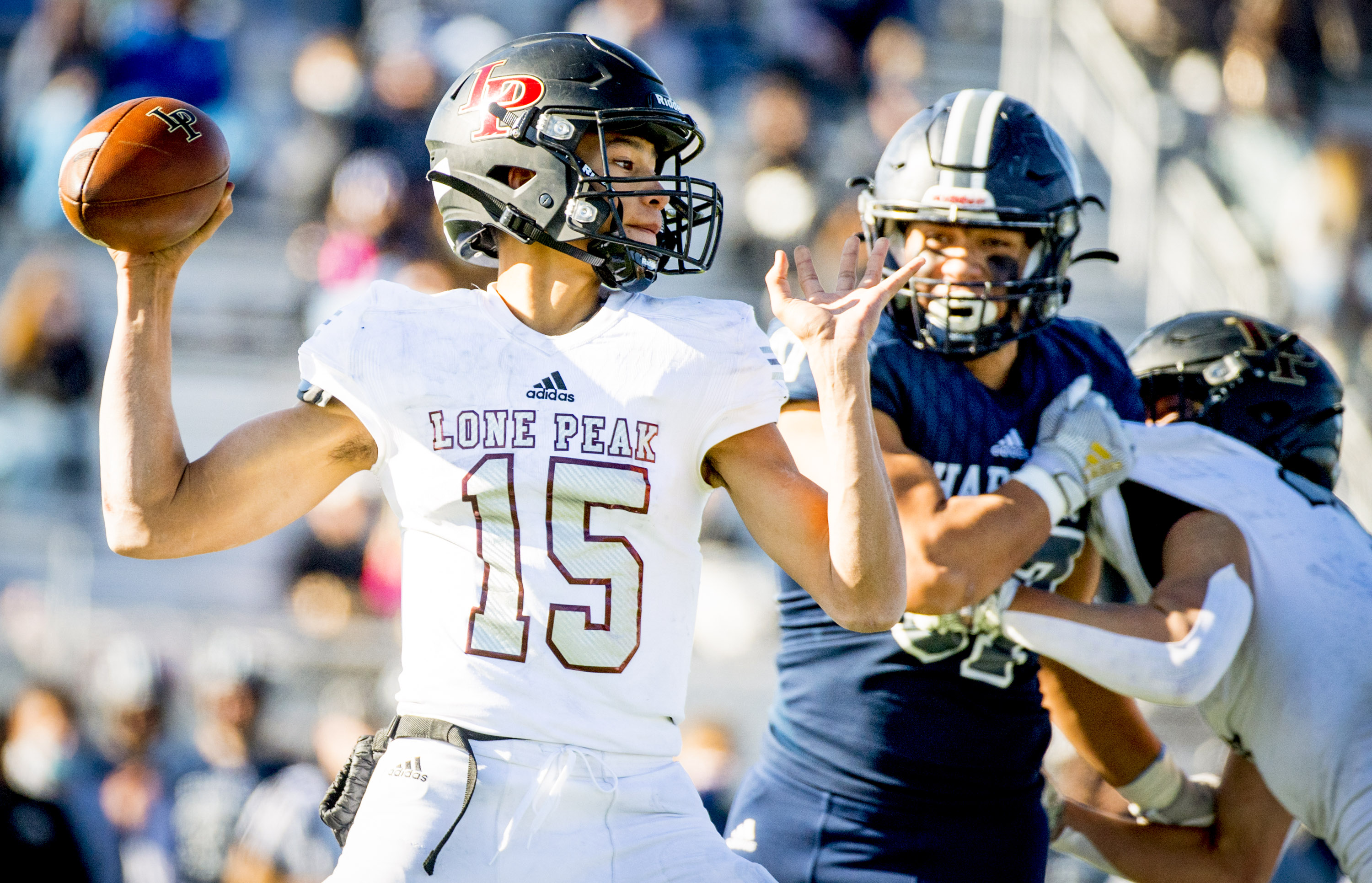 Lone Peak quarterback Jonah Heimuli (15) falls back to pass during the 6A state championship game between the Lone Peak Knights and the Corner Canyon Chargers held at Cedar Valley High School in Eagle Mountain on Friday, Nov. 20, 2020. 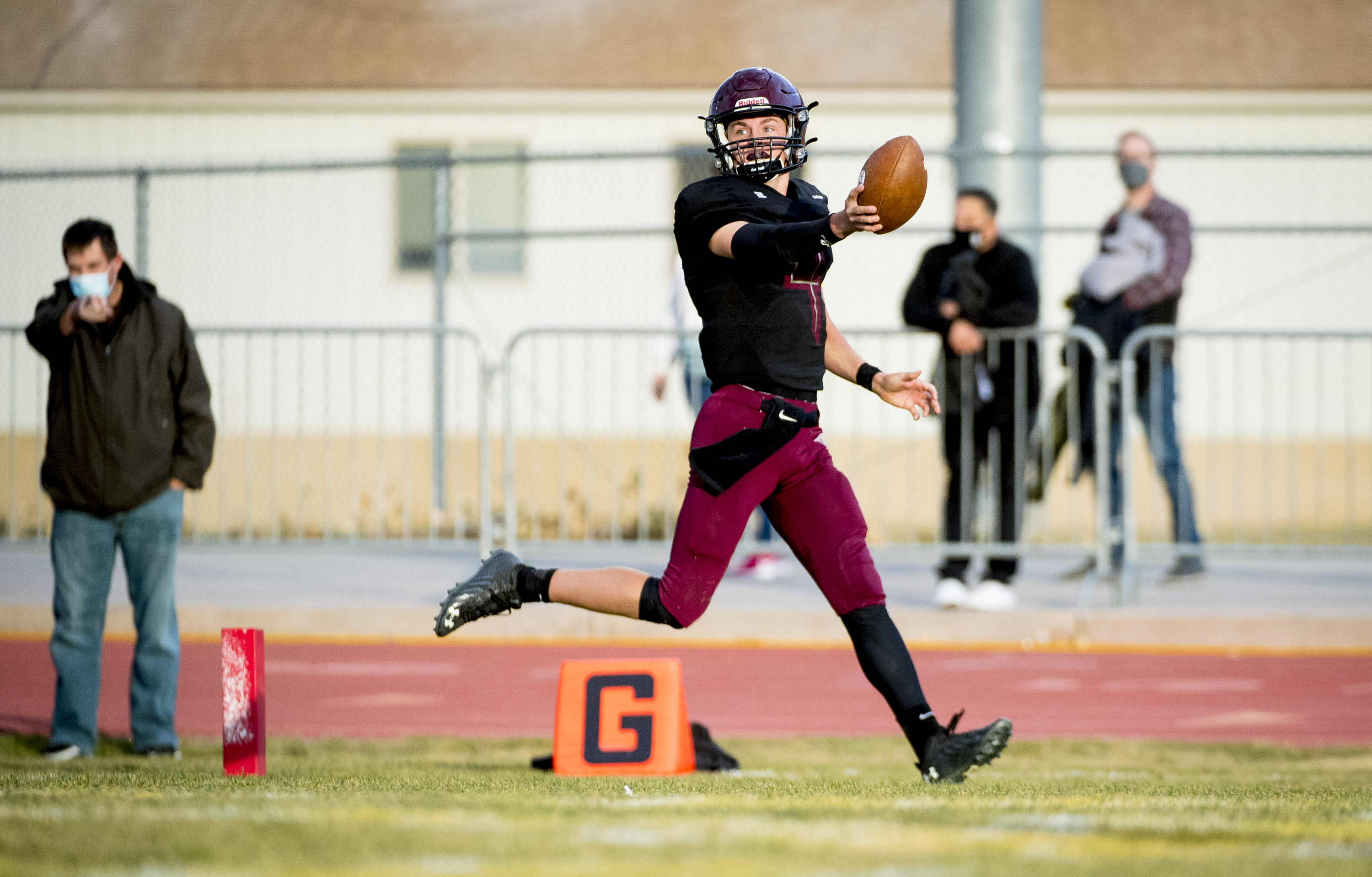 Maple Mountain quarterback Tyler Nelson (4) celebrates his touchdown as he crosses into the end zone during a game in the quarterfinals of the 5A state tournament between the Maple Mountain Golden Eagles and the Alta Hawks held at Maple Mountain High School in Spanish Fork on Friday, Nov. 6, 2020. 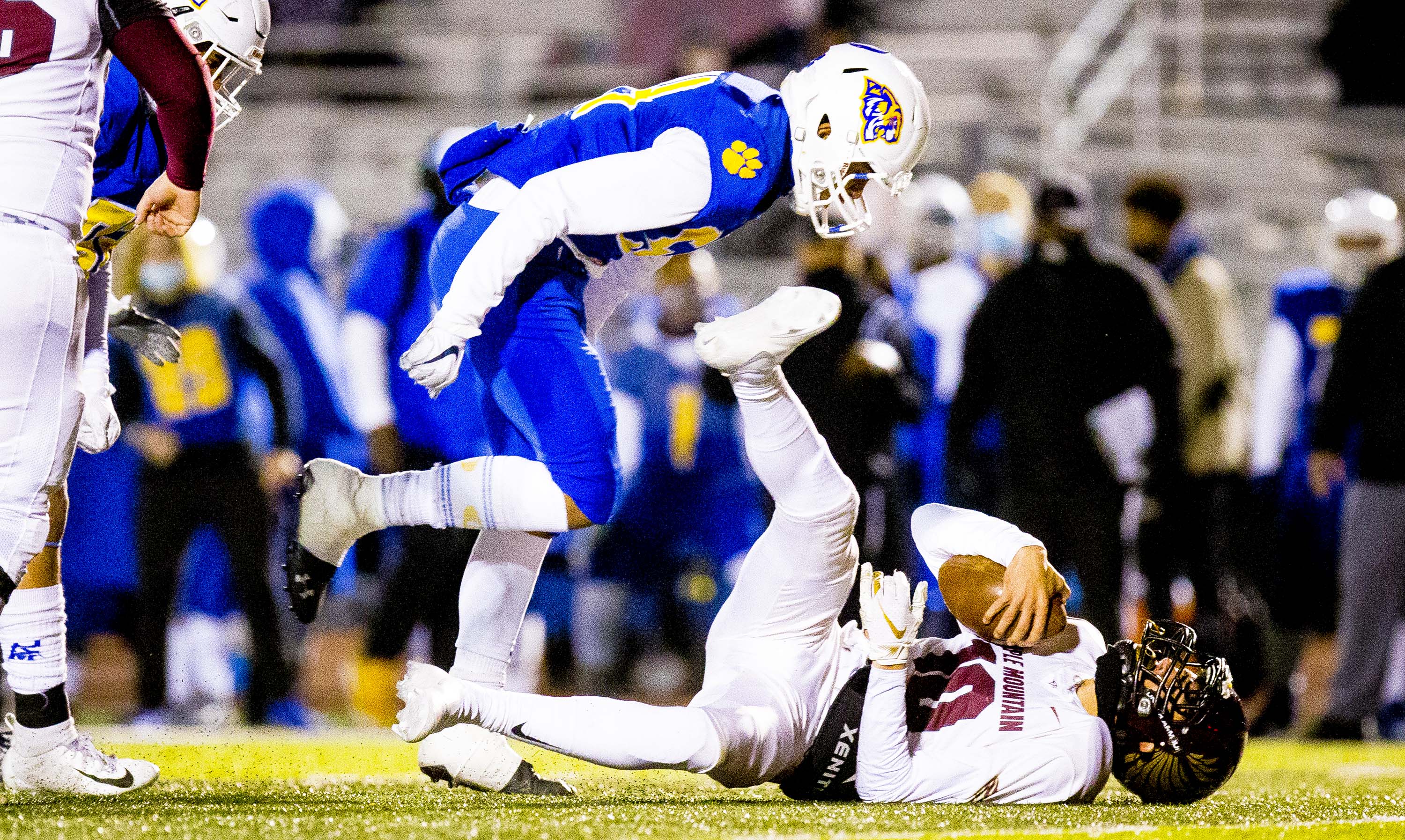 Orem defensive end Preston Puni (54) downs Maple Mountain quarterback Alii Gene Ho-Ching (10) during a game in the semifinals of the 5A state tournament between the Orem Golden Tigers and the Maple Mountain Golden Eagles held at Cedar Valley High School in Eagle Mountain on Friday, Nov. 13, 2020. 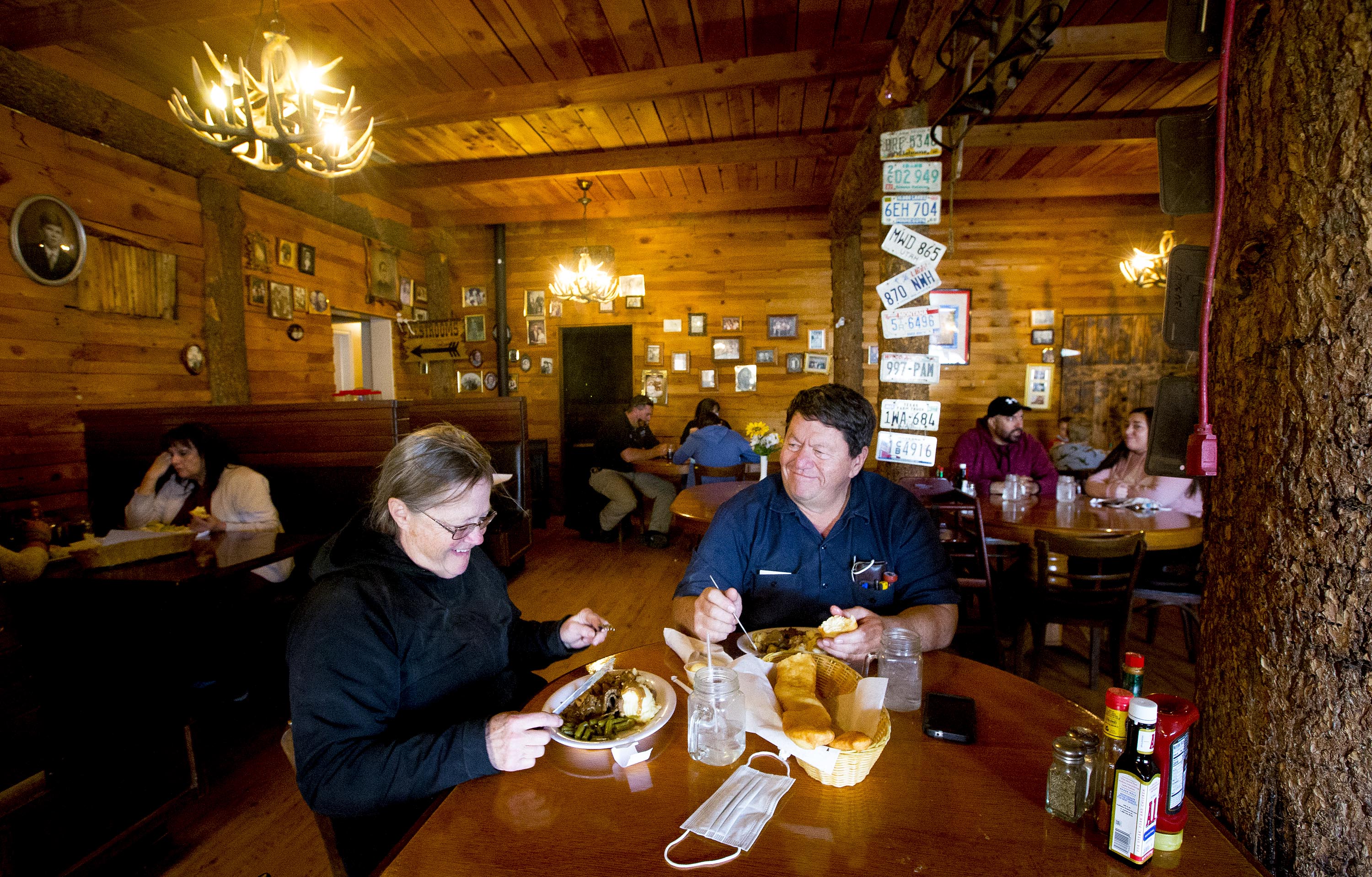 Jim and Annalee Gause, of Santaquin, enjoy a meal during the final day of business for Leslie's Family Tree in Santaquin on Friday, Nov. 13, 2020. The restaurant had been a community staple of Santaquin for 36 years. 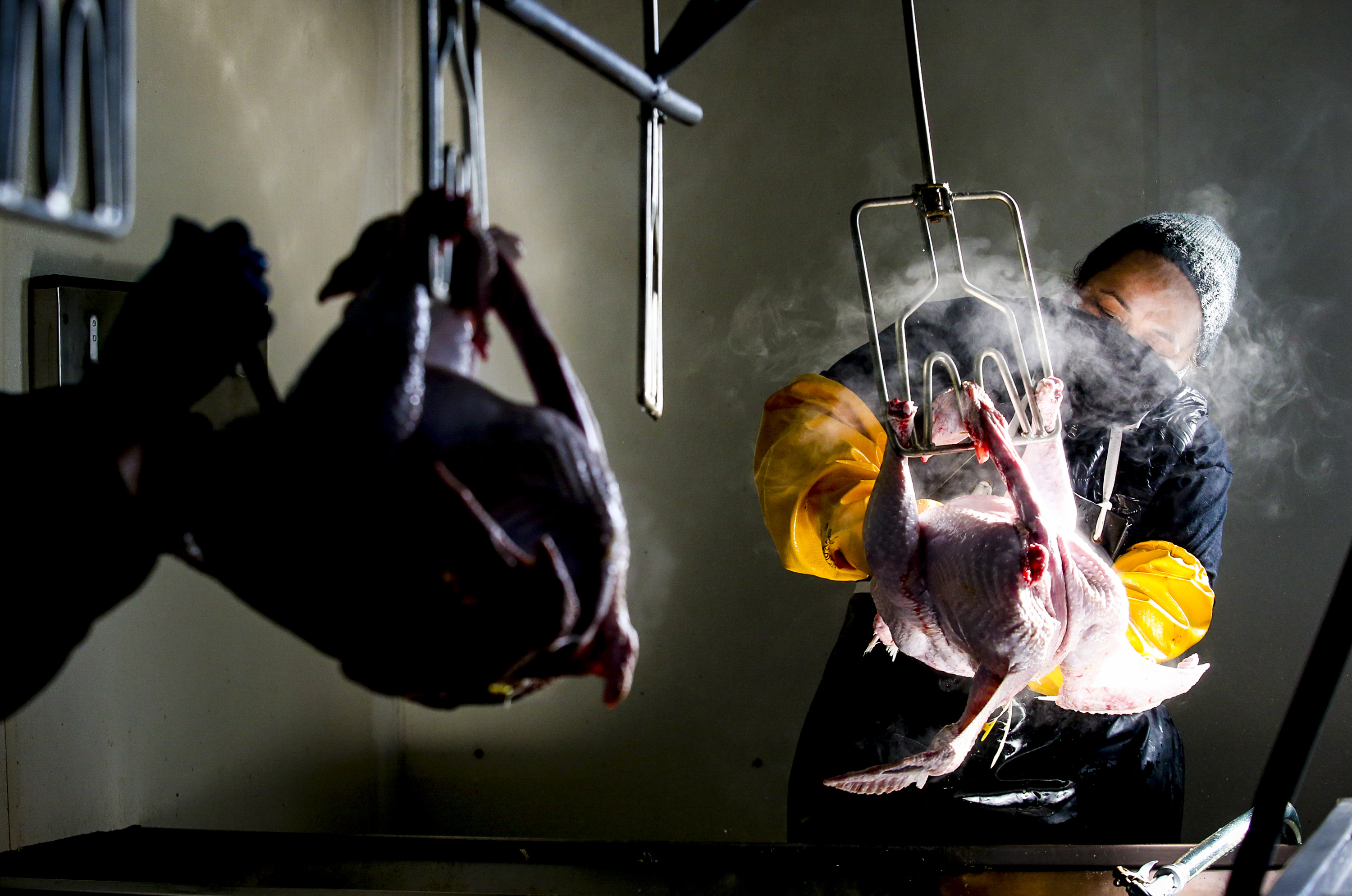 FFA advisor Yadira Fregozo removes the innards of a turkey as turkeys are processed at the 4-H and FFA Poultry Plant in Bothwell on Tuesday, Nov. 17, 2020. The Utah State Junior Turkey Program usually yields about 2,800 to 3,300 turkeys, varying in weights, starting at about 14 pounds and going to more than 30 pounds. 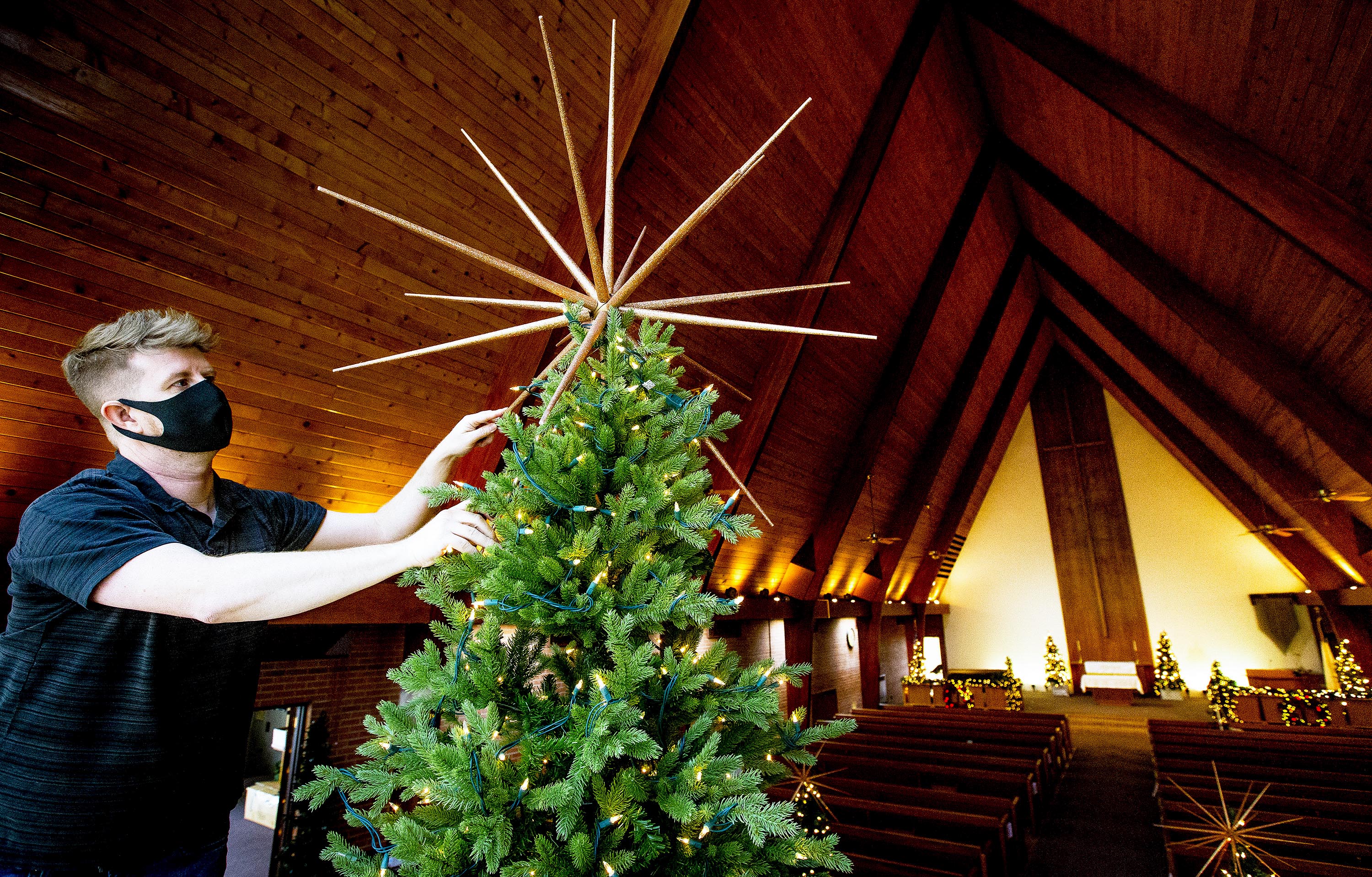 Building liaison and church organist Dave Lewis decorates the sanctuary of the Provo Community Congregational United Church of Christ for the Christmas season on Monday, Nov. 23, 2020. Fundraising is underway to help in preserving, updating and improving the 98-year-old church’s facilities. 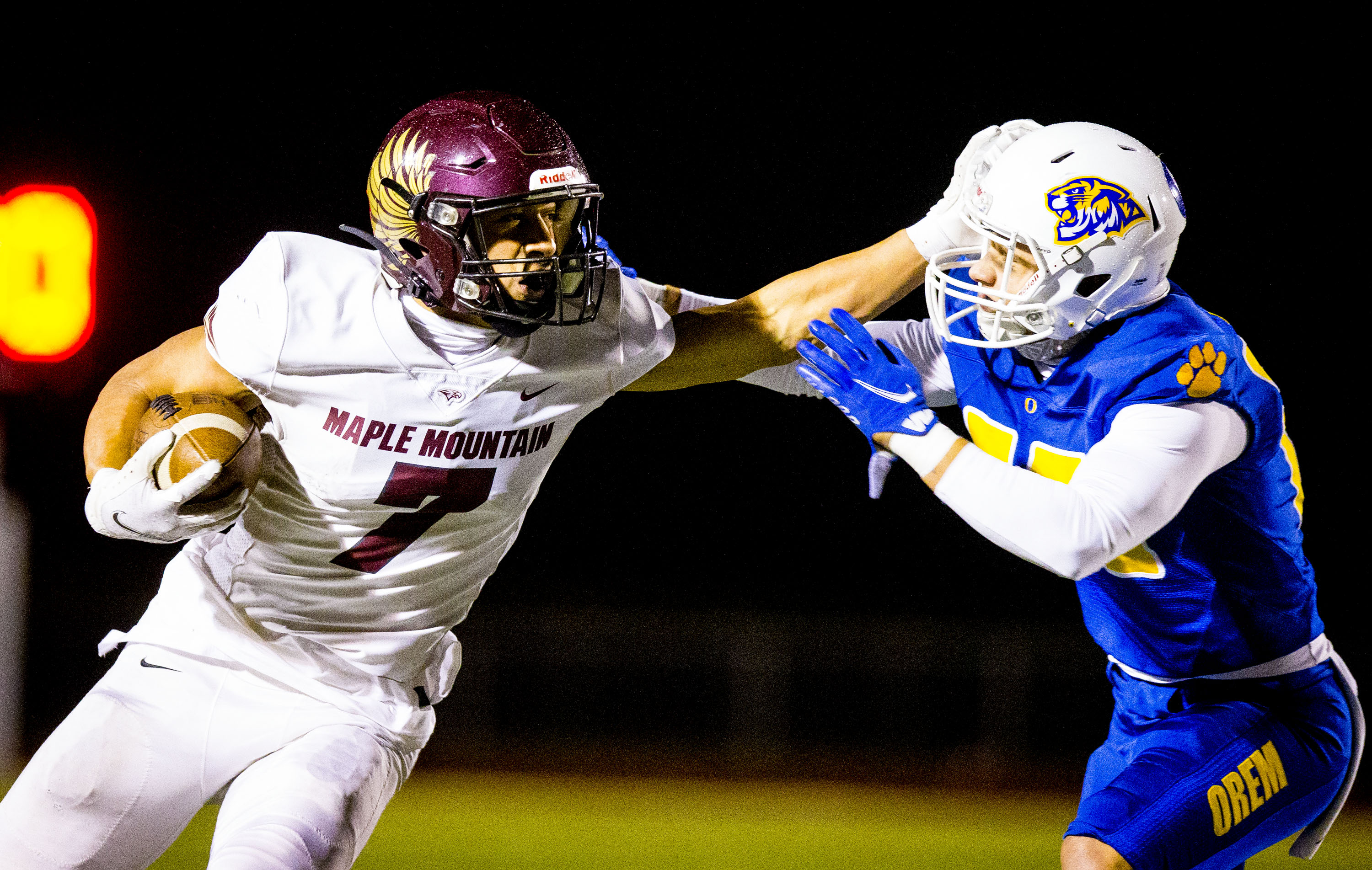 Maple Mountain wide receiver Aedan Seiuli (7) stiff-arms Orem free safety Kolton Brown (14) during a game in the semifinals of the 5A state tournament between the Orem Golden Tigers and the Maple Mountain Golden Eagles held at Cedar Valley High School in Eagle Mountain on Friday, Nov. 13, 2020. 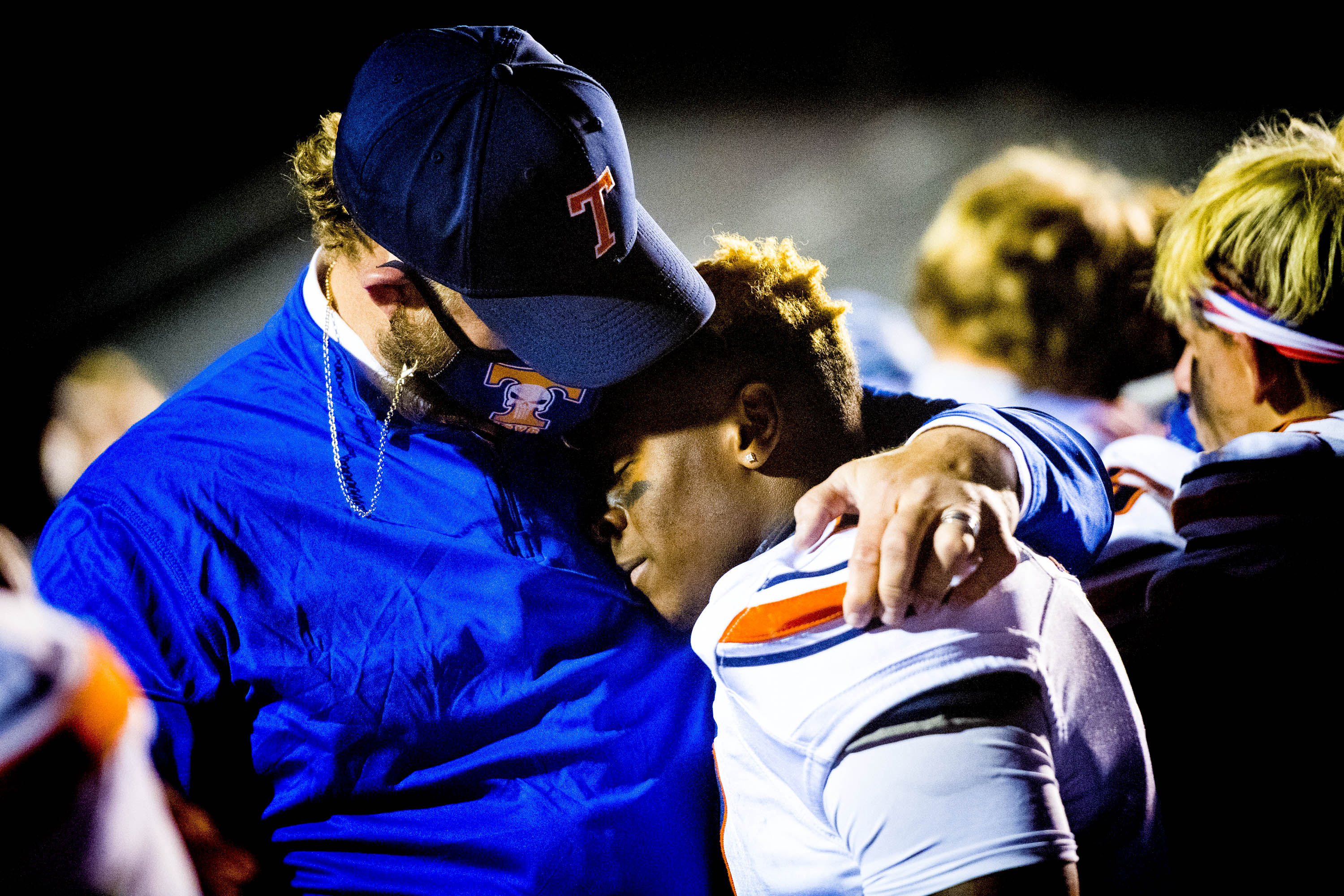 Timpview head coach Andy Stokes embraces running back Targhee Lambson (7) after the Thunderbirds were defeated by the Orem Golden Tigers in the 5A state championship game at Cedar Valley High School in Eagle Mountain on Friday, Nov. 20, 2020. 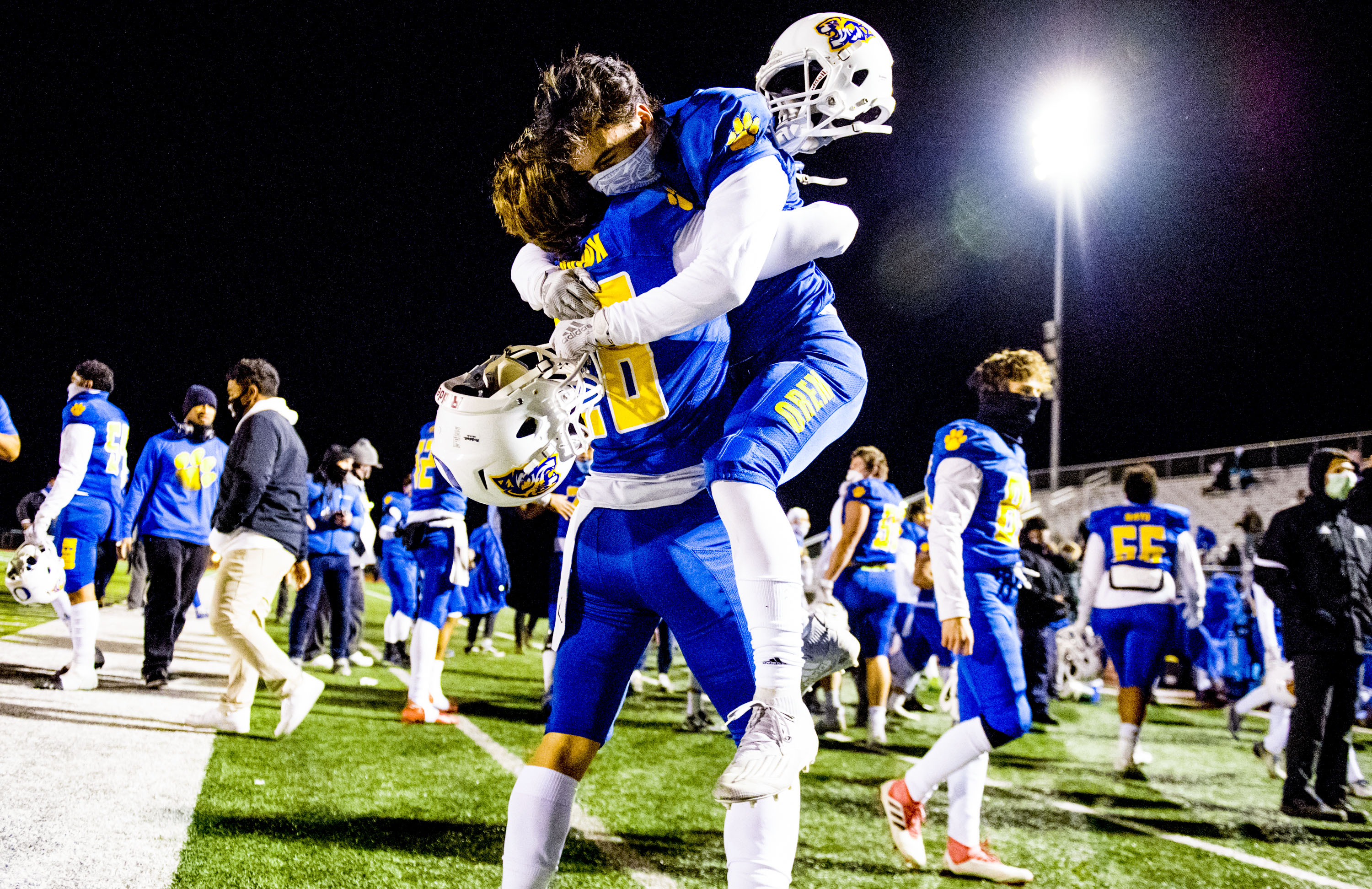 Orem cornerback Brayden Theurer (11) and defensive back Kade Brown (28) embrace after defeating the Maple Mountain Golden Eagles in the semifinals of the 5A state tournament held at Cedar Valley High School in Eagle Mountain on Friday, Nov. 13, 2020. 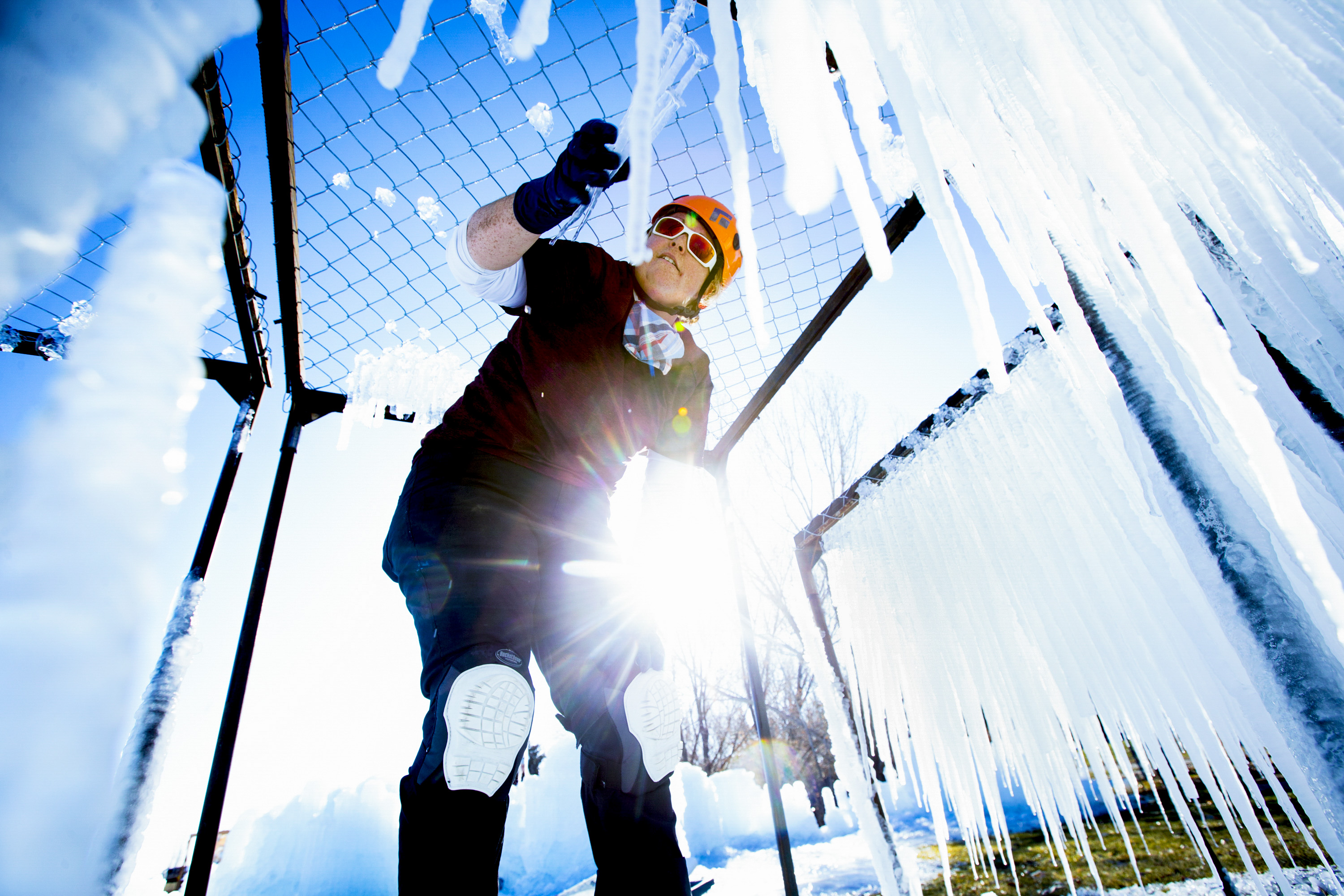