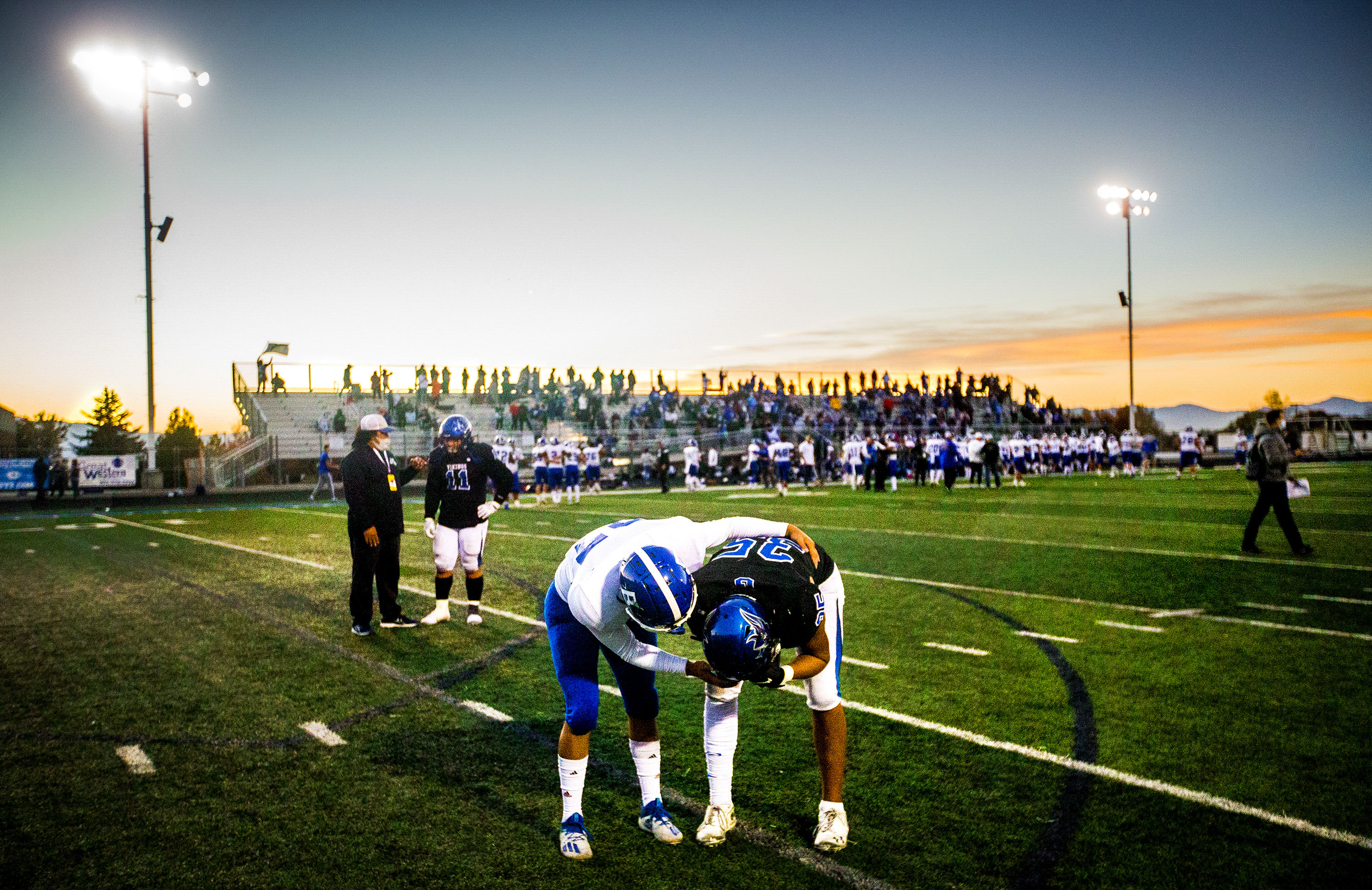 At the end of each month when I sit down to create my monthly blog posts, a sense of whiplash seems to set in as I review another four weeks of work. Looking back at October, it's no surprise I feel that way now especially.

Each month has it's own craziness to conquer, and I always seem to be running around more and more as time goes on to get photos for the wide variety of stories we publish in the Daily Herald. Frankly, it's hard to realize "how I did' any given month until I put together this blog. I'm so used to photographing an assignment, submitting photos and pivoting to the next assignment that I don't really get to take a good look at my photos until after the fact.

Throughout October I found myself with three assignments per day almost every day that I worked, often occurring in vastly different parts of the county at different times that aren't usually conducive to one another. Thus is the challenge of a newspaper photojournalist, but that challenge seems to always be changing and getting harder. For one, personally I felt a bit like Frankenstein as I rushed between assignments – I've had pretty severe runner's knee for several months now, and a pain in my lower back has begun to really flare up in the last month or two. Which, if you, say, have to run six-ish miles up hilly terrain several times to cover a state cross country meet, that doesn't sit well with my body's increasingly creaky composure. I certainly love what I do, but my body doesn't always agree the day after and that's becoming more and more apparent as time goes on – I'm getting "older"!

One external challenge for myself and the rest of the Daily Herald's newsroom was losing our editor-in-chief this past month. Wanting to leave but leave us in good hands, our now former editor-in-chief gave over a month's notice at the start of this month to ensure he could help us sail through big upcoming things (like the presidential election), but corporate had other ideas and outed him two days after he gave his notice. It's uncertain when the EIC position will be filled. Without an editor-in-chief, our current managing editor is now acting essentially as our editor-in-chief, leaving me, more or less, as the second-in-command in terms of being the glue between all the paper's departments. This change has only increased the frequency and depth at which I fulfill management duties for my job(s) – I call myself the photo editor and chief photographer, and I am both of those things nearly 100% of the time anymore. The challenge has been tough considering all the other things going on in the world, the news industry and local happenings (state high school sports, COVID, election, and so on). However, though I feel utterly spent at the end of this month, it's a satisfying feeling to look back at a month that's often one of my favorite of the year, and this one was no different. 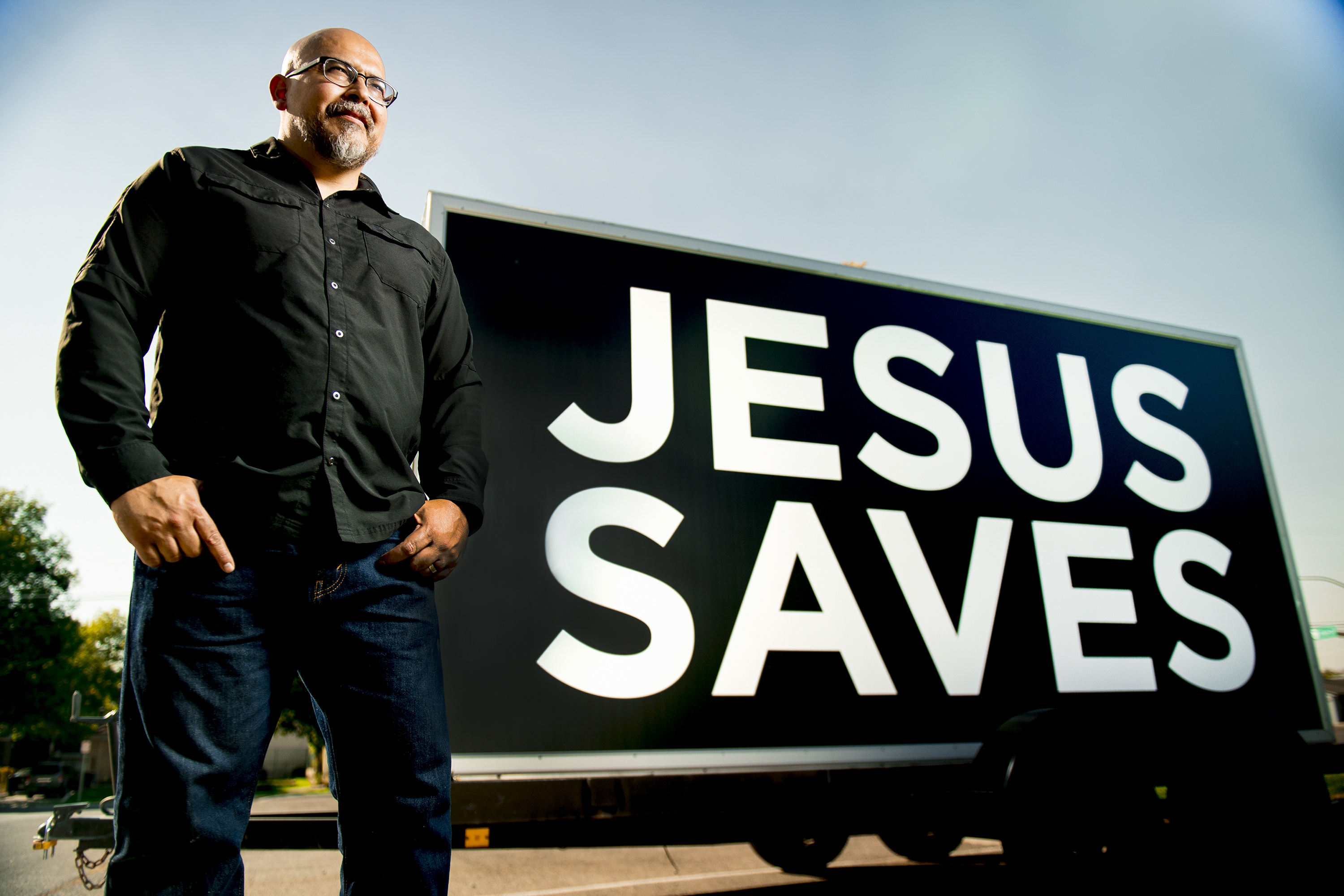 Joe McCormick, pastor of Calvary Mountain View Church, poses for a portrait in front of a billboard displayed in the parking lot of the church in American Fork on Thursday, Oct. 1, 2020. For those living along the Wasatch Front, no matter what denomination, they know that it’s time for The Church of Jesus Christ of Latter-day Saints’ semi-annual General Conference the first weekend in October. Does that matter to other denominations? Not much, according to Pastor Joe McCormick. 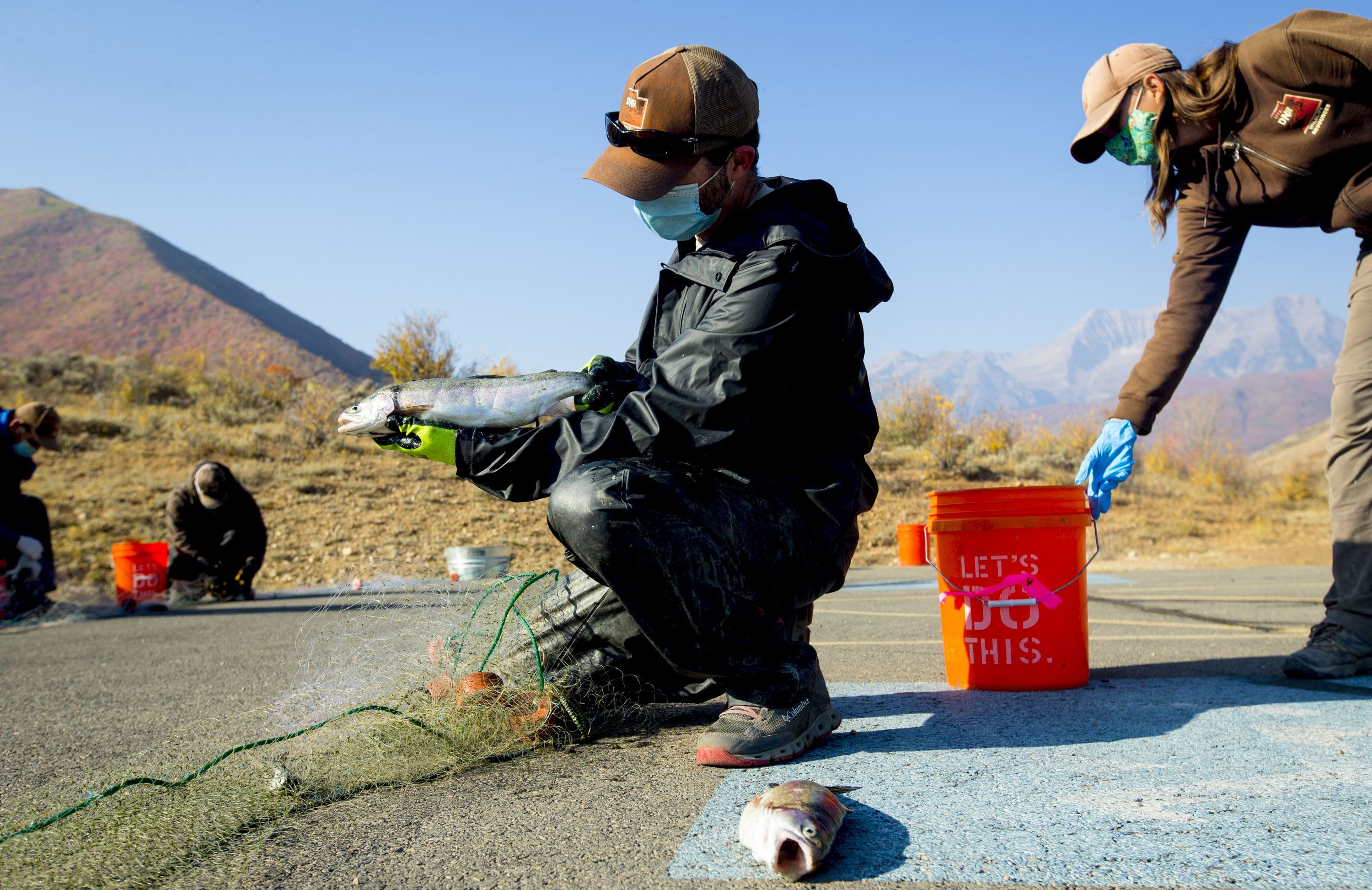 Regional aquatics manager Chris Crockett untangles a fish from a gill net while members of the Utah Division of Wildlife Resources record data from a sampling of fish from the reservoir at Deer Creek State Park west of Wallsburg on Tuesday, Oct. 6, 2020. The purpose of this process was to survey fish populations in Deer Creek Reservoir, a popular fishing spot for anglers in Wasatch and Utah counties. 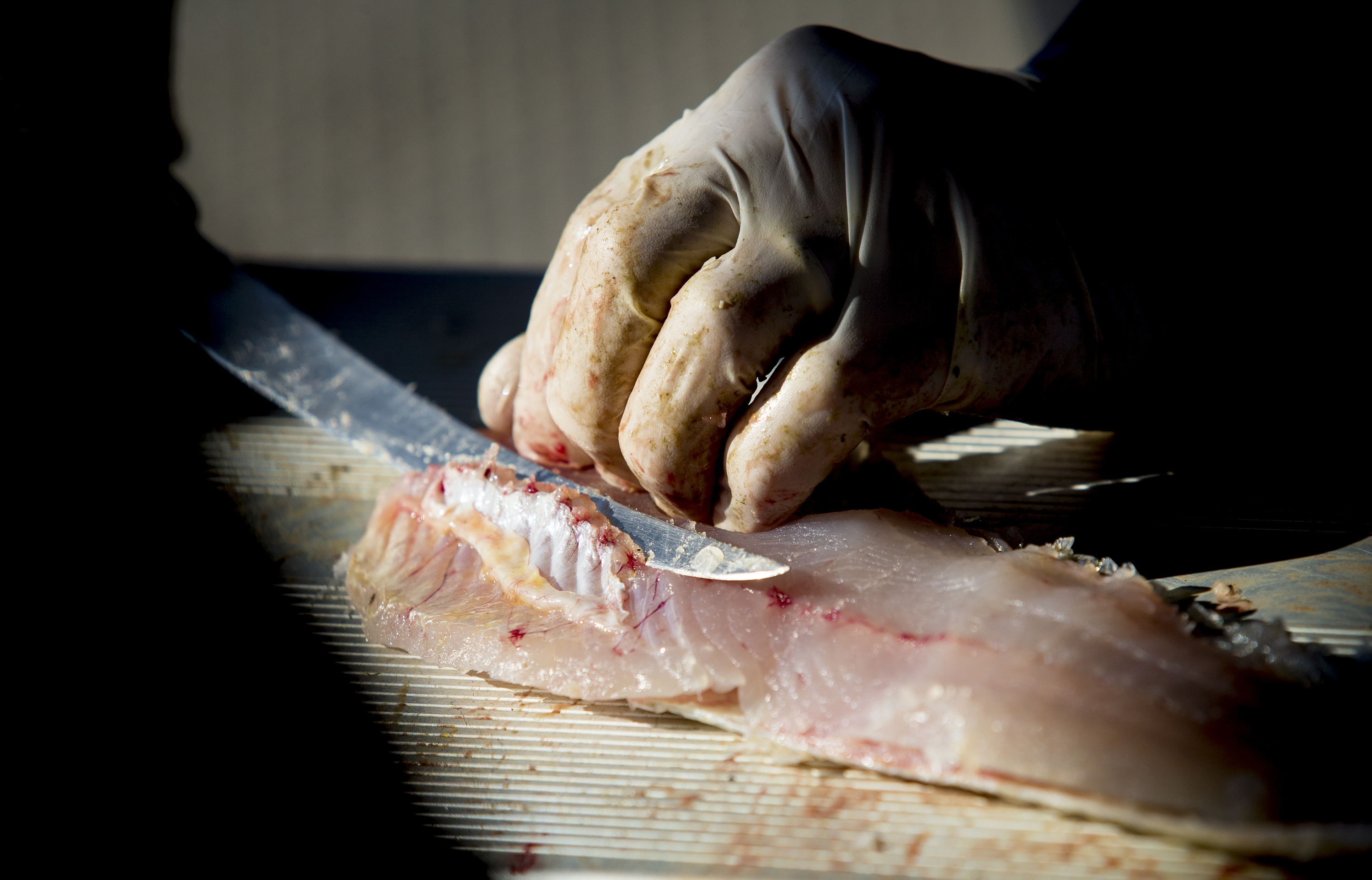 Wildlife recreation specialist Mike Packer fillets a fish while members of the Utah Division of Wildlife Resources record data from a sampling of fish from the reservoir at Deer Creek State Park west of Wallsburg on Tuesday, Oct. 6, 2020. Meat from the fish was donated to local food banks. 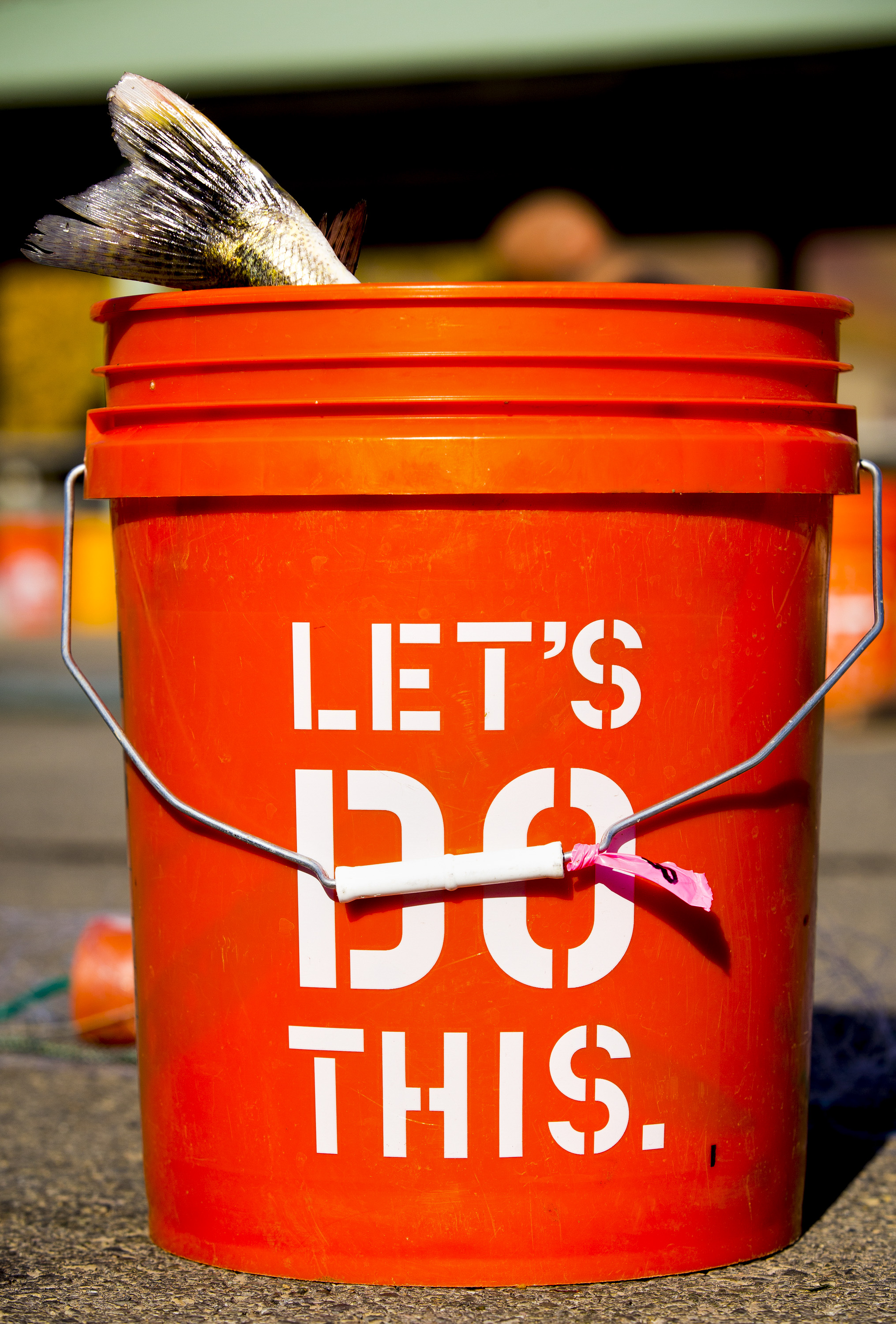 A fish untangled from a gill net awaits to be measured, weighed and filleted while members of the Utah Division of Wildlife Resources record data from a sampling of fish from the reservoir at Deer Creek State Park west of Wallsburg on Tuesday, Oct. 6, 2020. 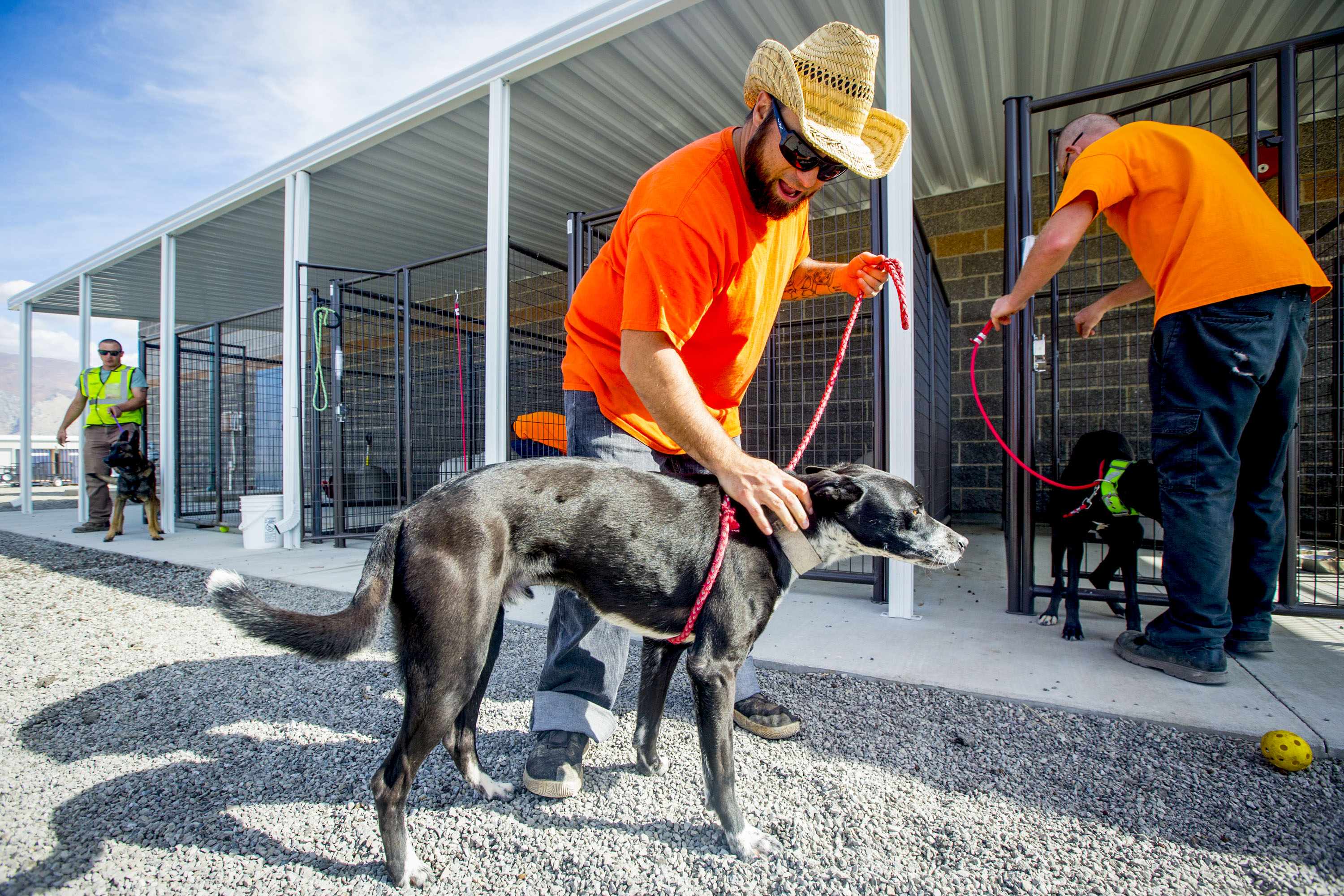 Matt Bowman pets his dog Bandit as he and other inmates prepare to walk their dogs as part of the “A New Leash on Life” program offered through the Jail Industries Program at the Utah County Jail in Spanish Fork on Wednesday, Oct. 14, 2020. The program pairs up at-risk dogs with inmates of the Utah County Jail for training and socialization. 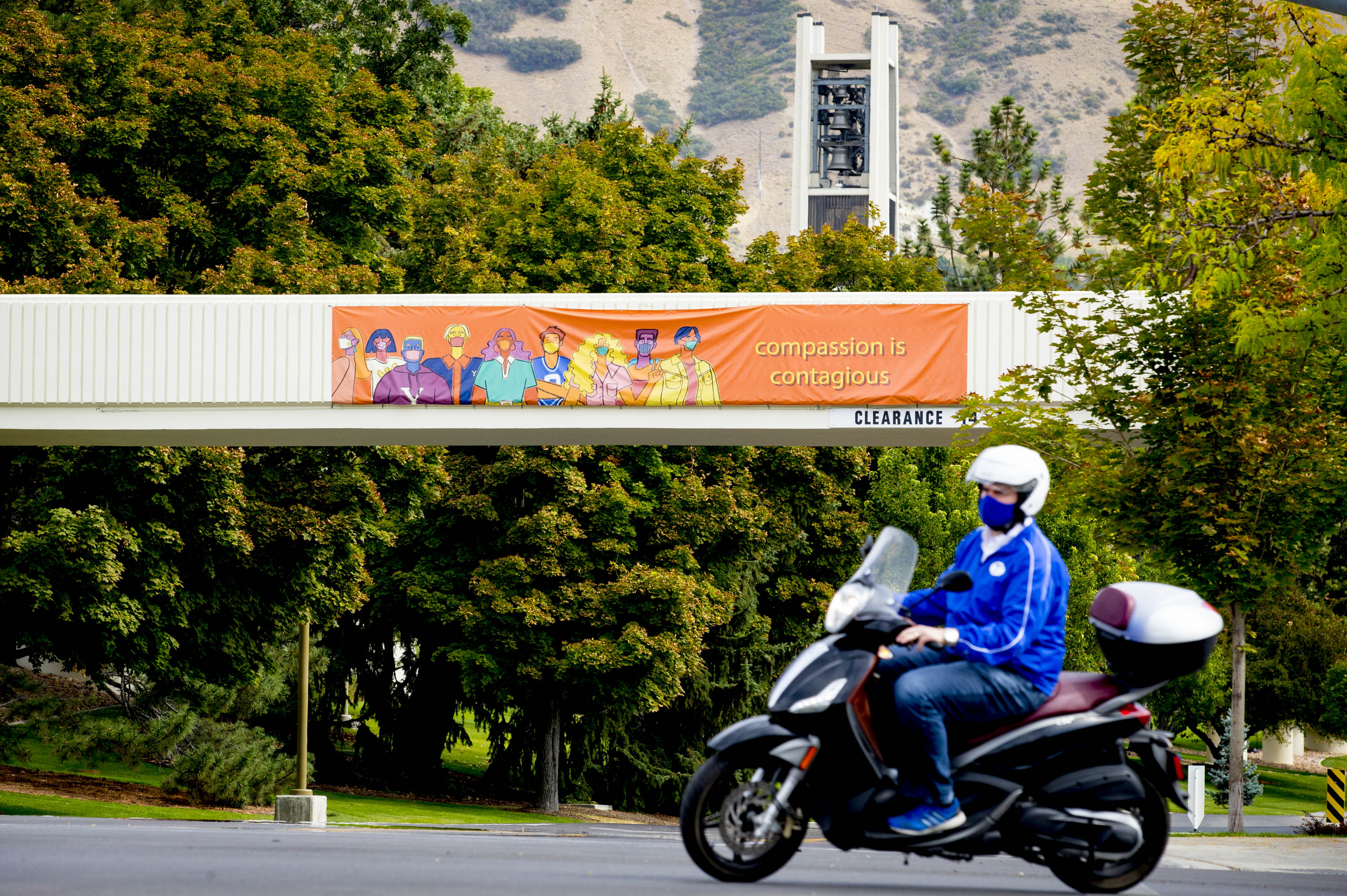 A banner promoting face masks hangs from a walking bridge on the campus of Brigham Young University in Provo on Friday, Oct. 2, 2020. Students are required to wear masks on campus, socially distance in classes and complete COVID-19 educational courses before taking classes. 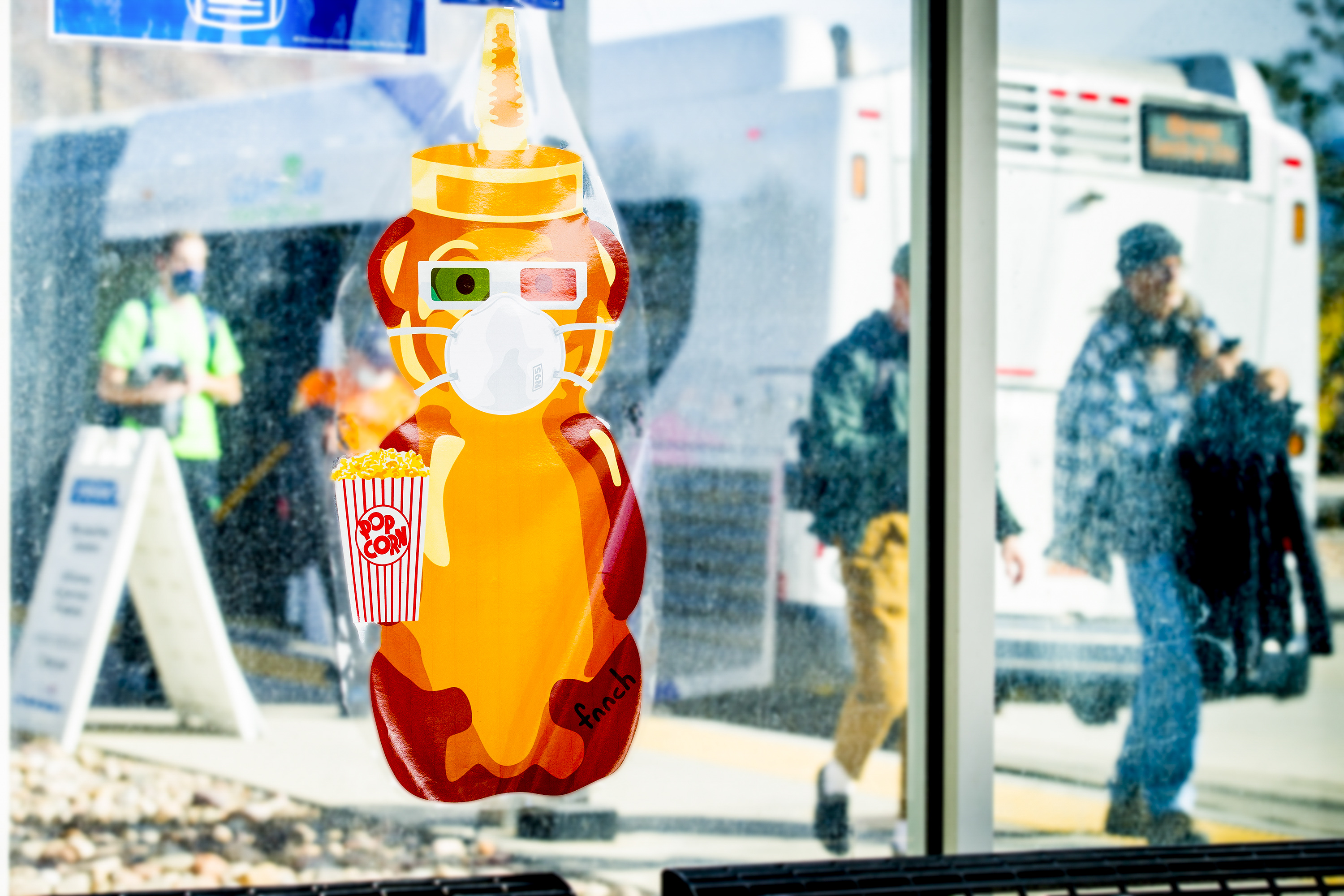 A promotional sticker is posted at the Provo Intermodal Center while people exit a UVX bus on Wednesday, Oct. 14, 2020. The sticker, created from artwork by San Francisco artist fnnch, is part of a face mask campaign introduced by the Utah Transit Authority. 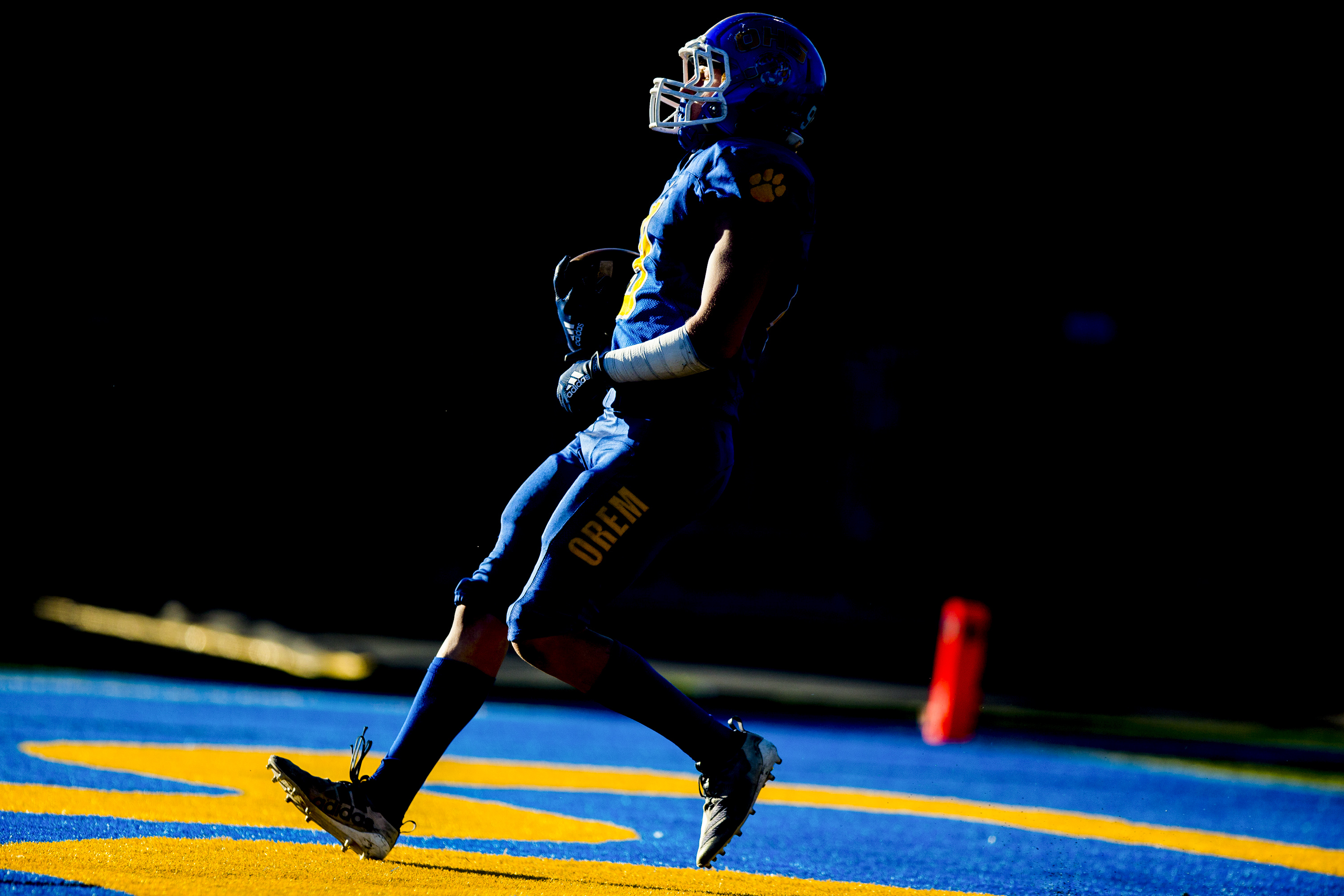 Orem running back Joe Smith (9) runs into the end zone for a touchdown during a game in the second round of the 5A state tournament between the Orem Golden Tigers and the Provo Bulldogs held at Orem High School on Friday, Oct. 30, 2020. 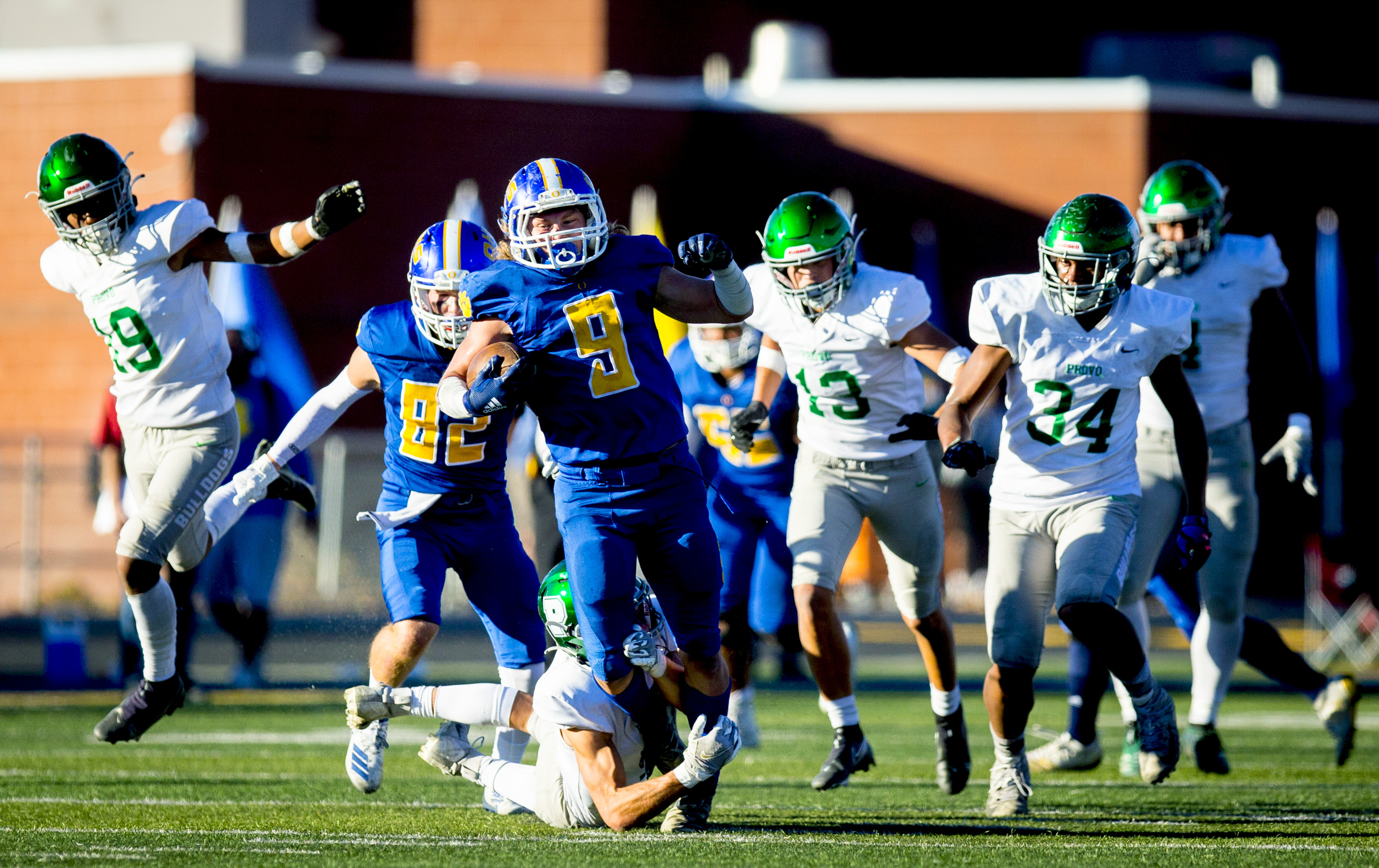 Orem running back Joe Smith (9) breaks free from a Provo defender to run the ball into the end zone for a touchdown during a game in the second round of the 5A state tournament between the Orem Golden Tigers and the Provo Bulldogs held at Orem High School on Friday, Oct. 30, 2020. 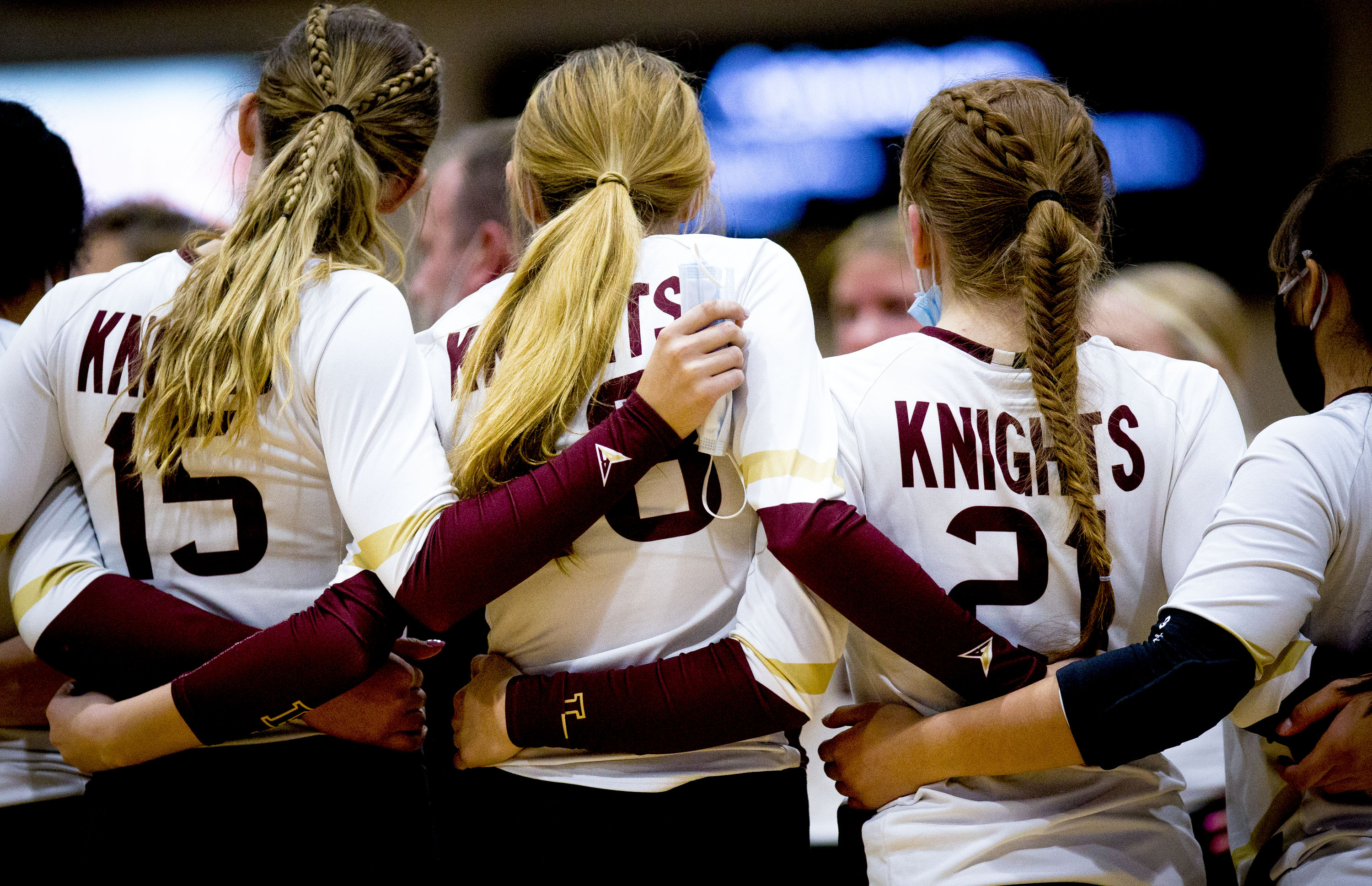 Lone Peak outside hitter Kelsie Valgardson (15) holds a face mask as she huddles with her teammates while they all listen to head coach Reed Carlson speak during a timeout in a game between the Lone Peak Knights and the Pleasant Grove Vikings held at Lone Peak High School in Highland on Tuesday, Oct. 27, 2020. 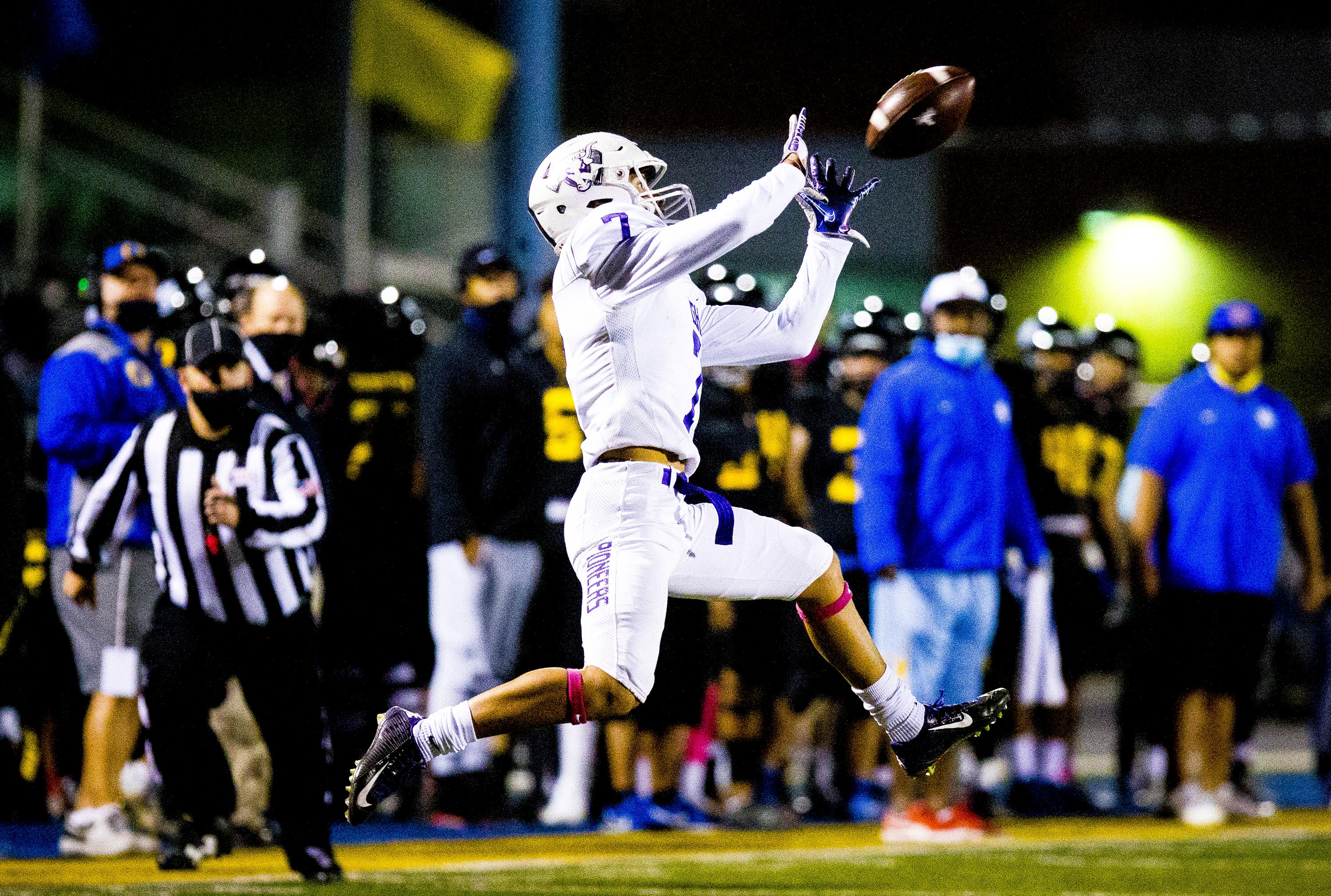 Lehi wide receiver Grady Gonzalez (7) completes a catch during a game between the Orem Golden Tigers and the Lehi Pioneers held at Orem High School on Wednesday, Oct. 14, 2020. 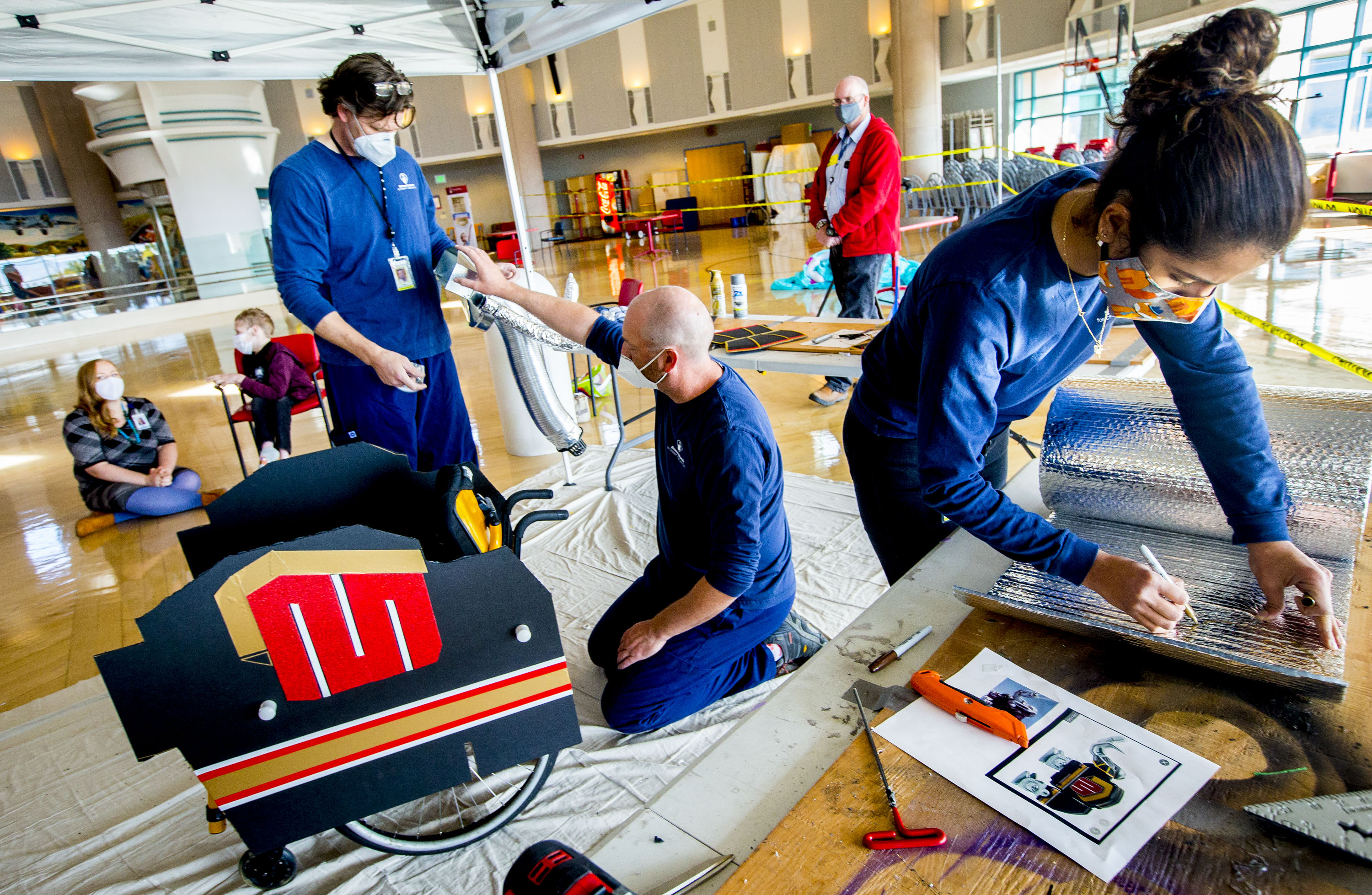 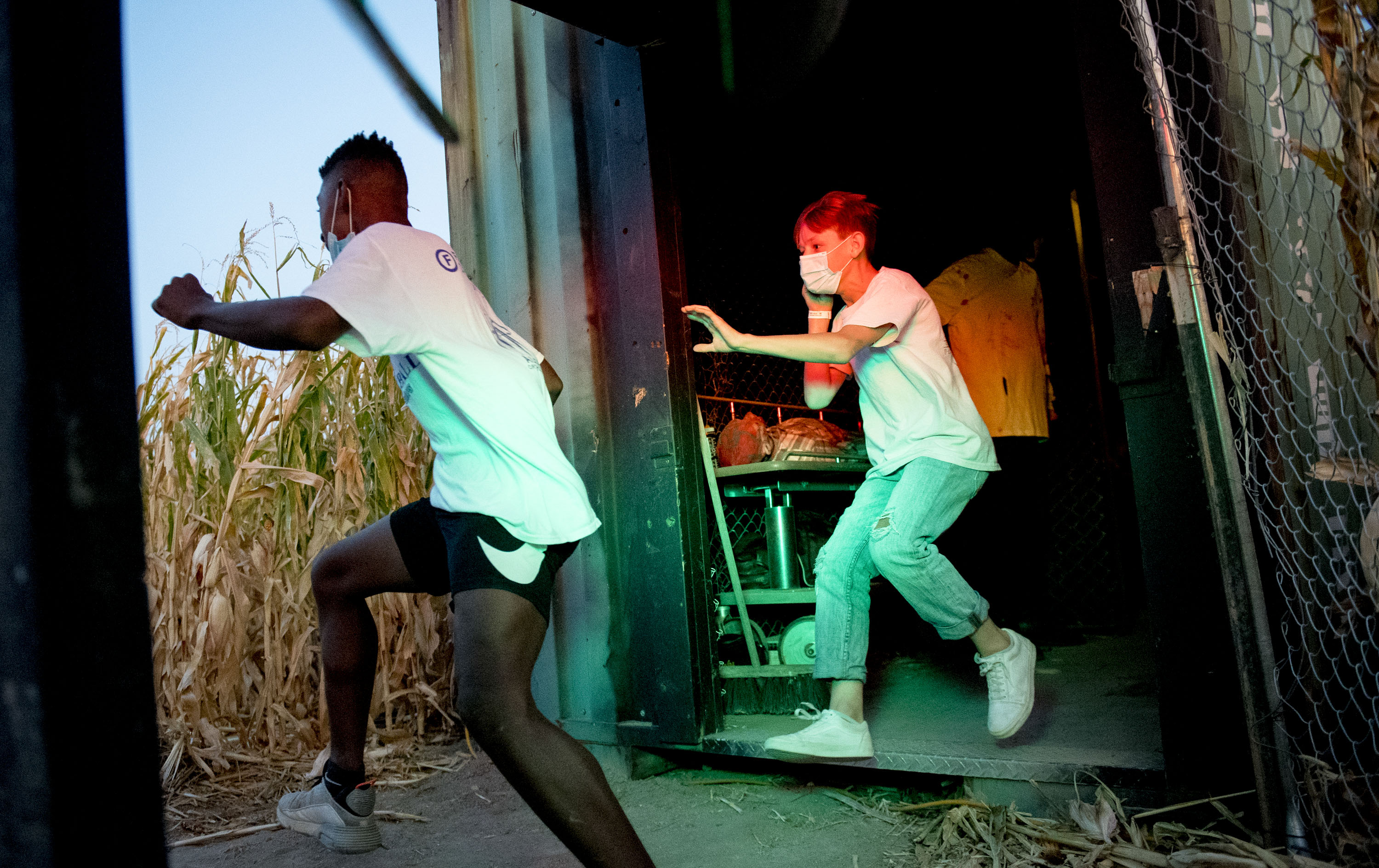 Visitors run out of an area after receiving a scare during the opening night of Insanity Point at Cornbelly's in Lehi on Friday, Oct. 2, 2020. Like haunted houses around the state and country, Insanity Point is changing the format of its haunts to adhere to state COVID-19 guidelines and allow for its doors to stay open for people to get their annual Halloween fright fix. 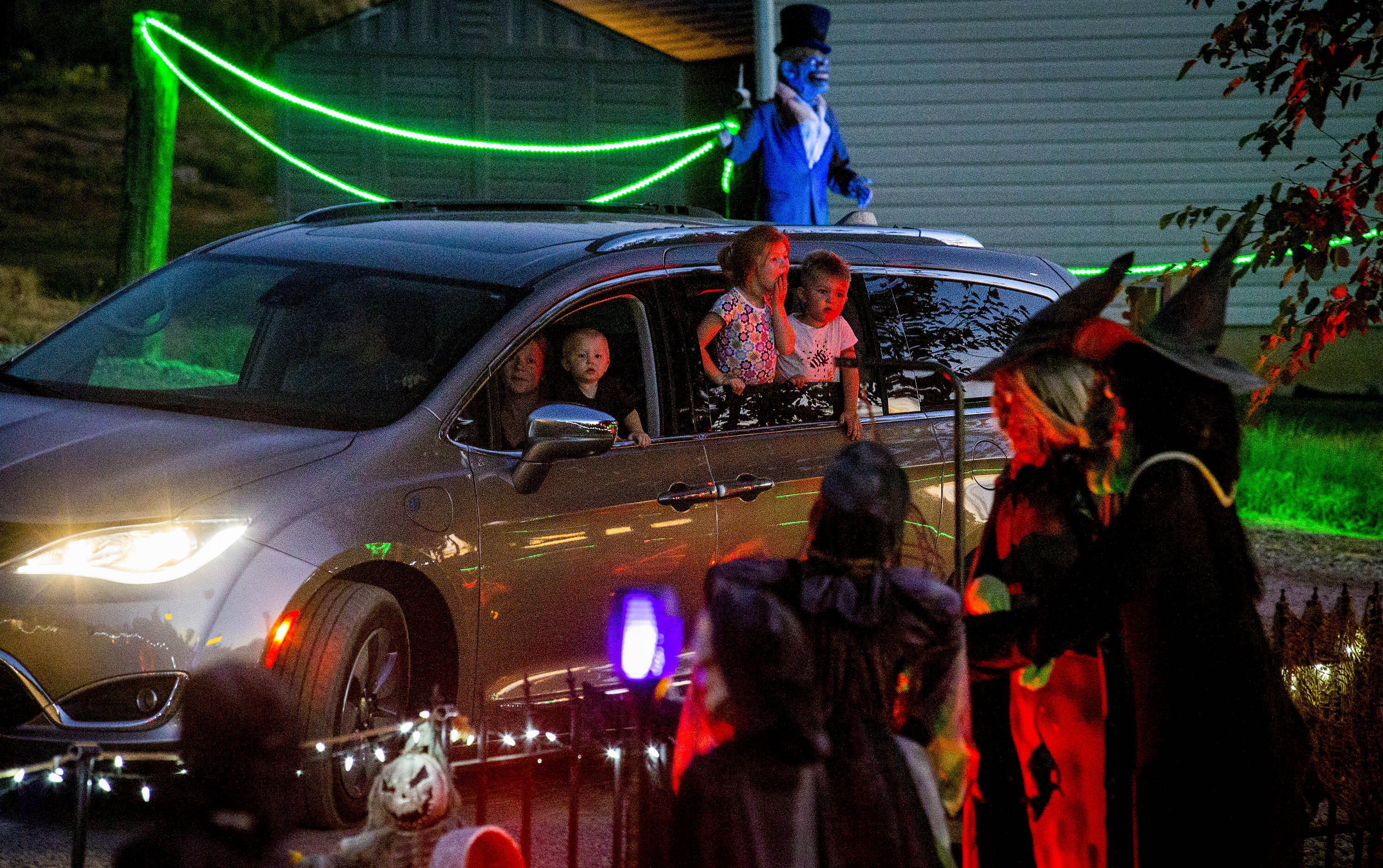 The children of the Young family, from right, Raiden, 3, Lux, 5, and Seidon, 1, react as their mother Stacy drives the family through the Canyon Road Haunt in Pleasant Grove on Wednesday, Oct. 21, 2020. The haunt is created by the Nicol family, and is located at 4416 N. Canyon Rd. 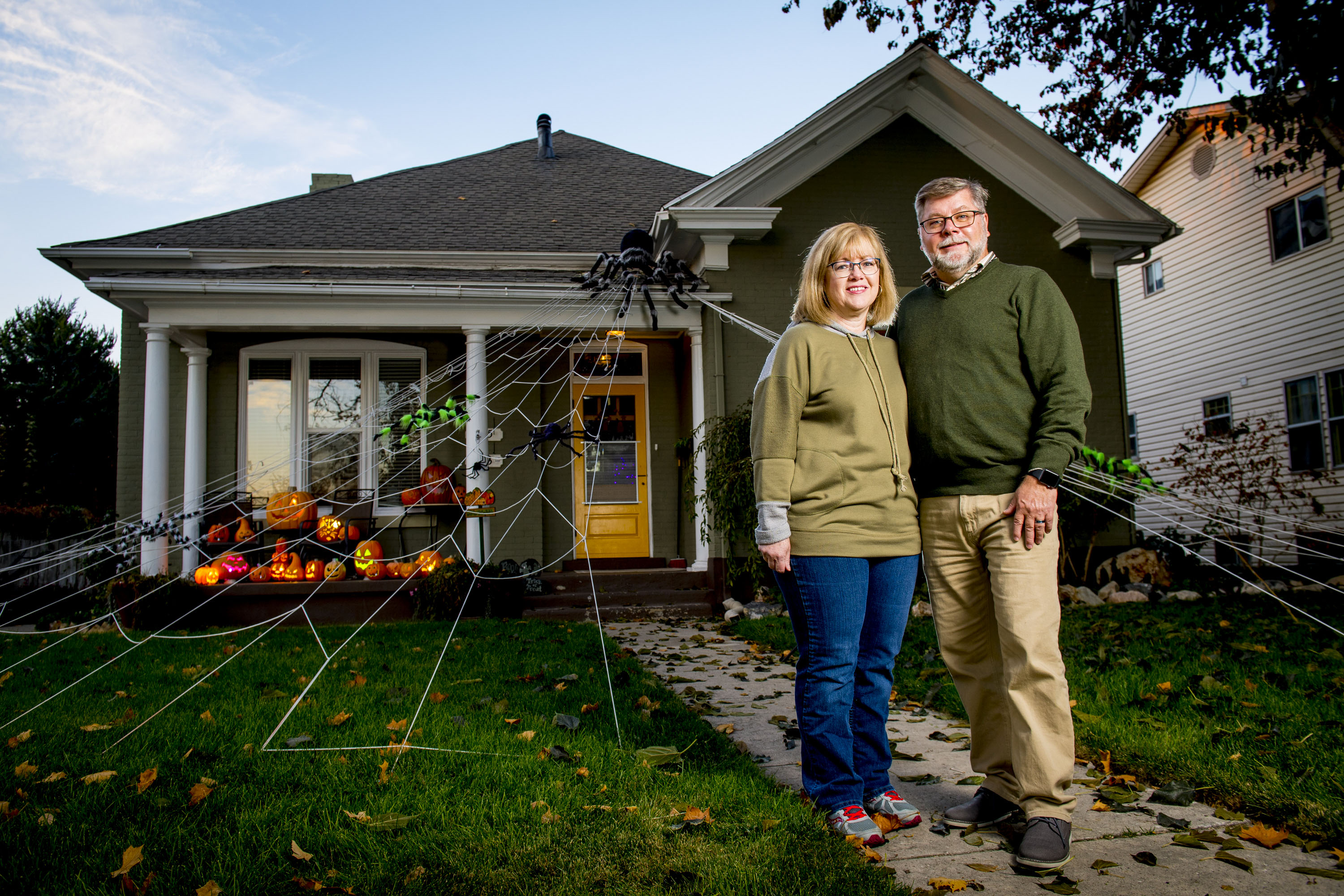 Maria and Duane Winden pose for a portrait in front of their home in Provo on Tuesday, Oct. 27, 2020. The outside and inside of their home was featured in the recent Hallmark movie “Christmas Tree Lane.” During production, their home was transformed into a Christmas-themed winter wonderland, complete with fake snow covering their yard. 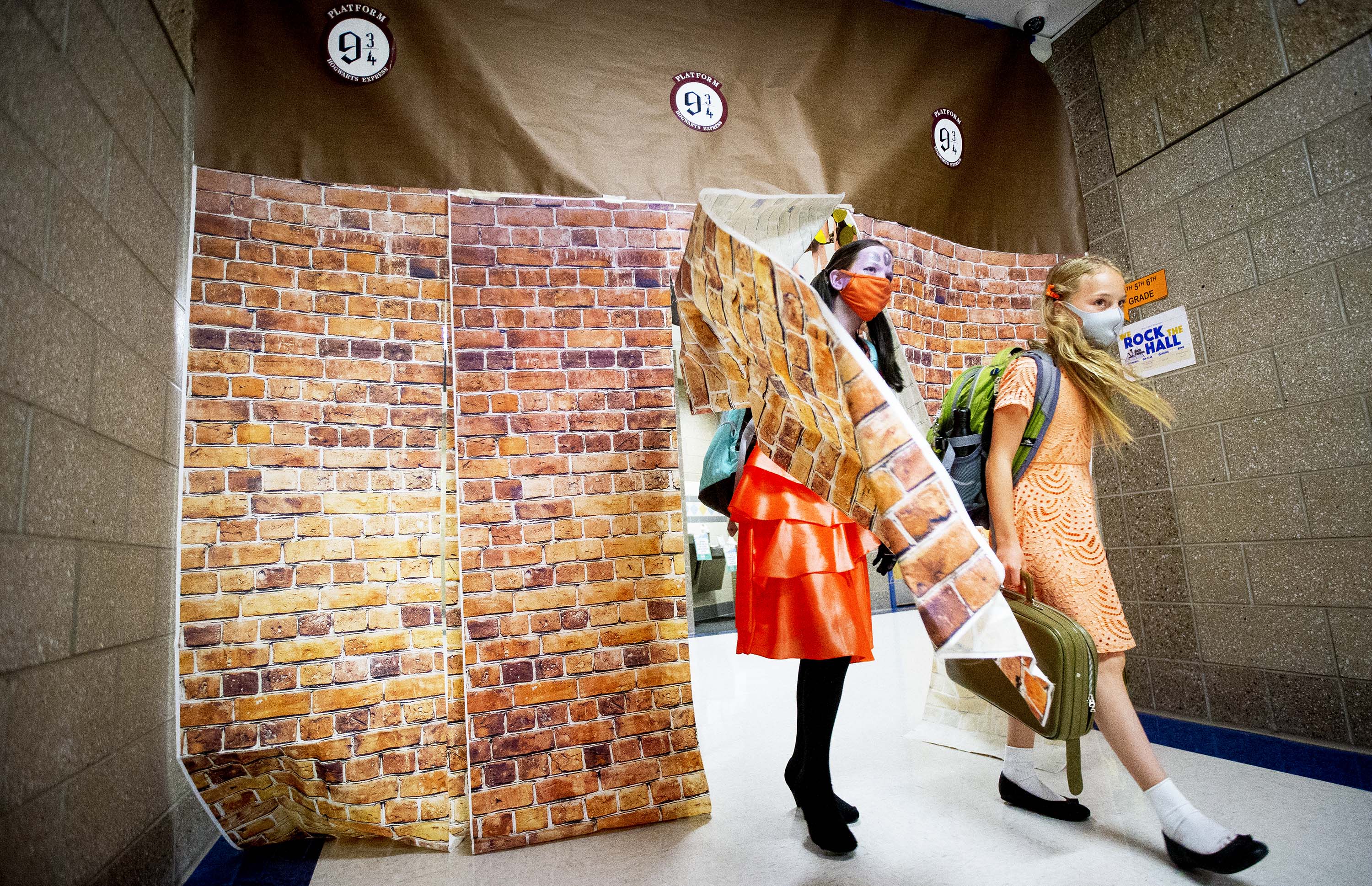 Fifth-grader Lucy Davis, 11, right, and sixth-grader Liliah Dutton, 11, walk through Harry Potter-themed decorations at the end of the school day at Rock Canyon Elementary School in Provo on Thursday, Oct. 29, 2020. 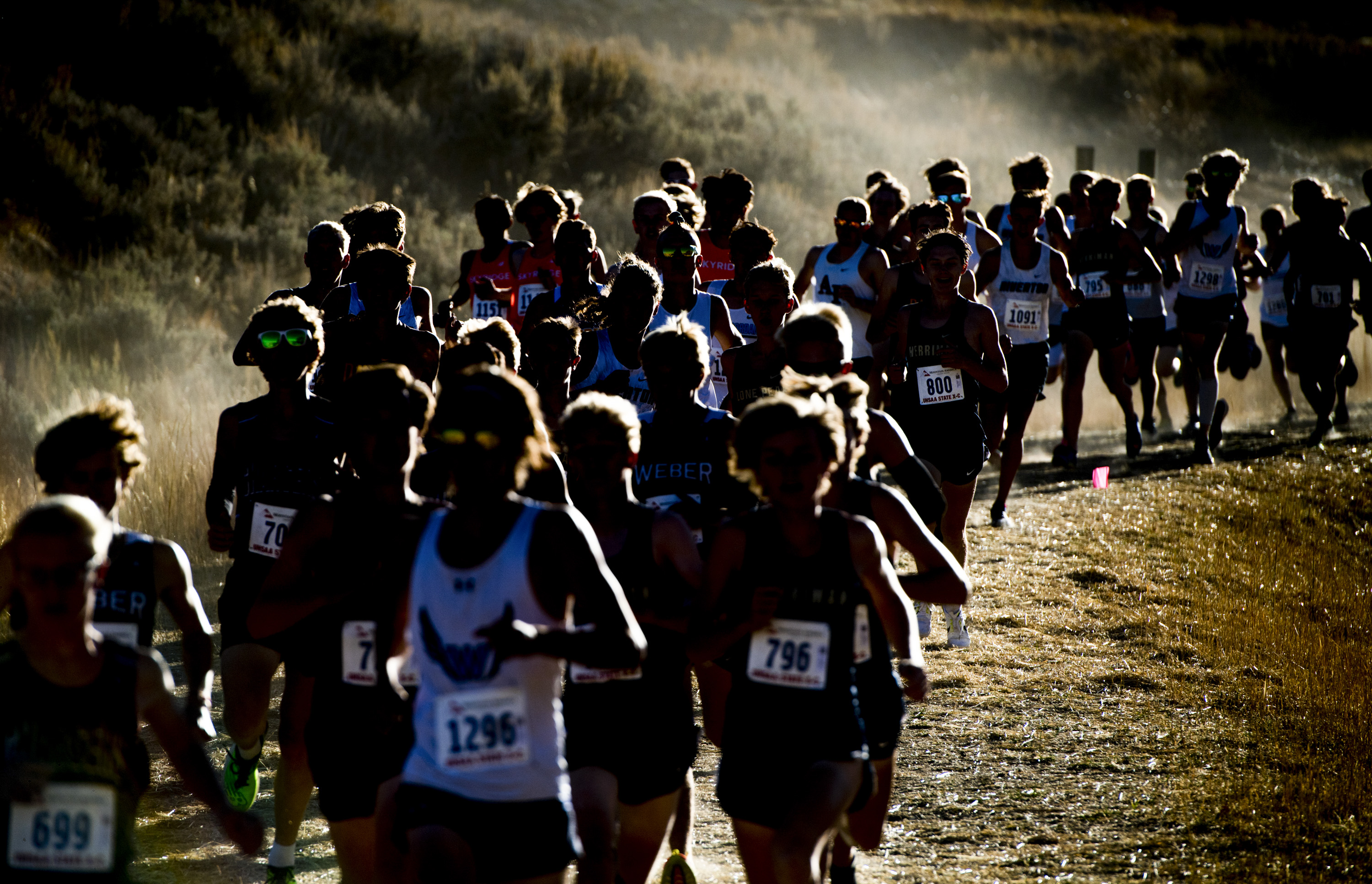 Runners make their way down a hill during the 6A boys race of the UHSAA State Cross Country Championships held at Soldier Hollow in Midway on Thursday, Oct. 22, 2020. 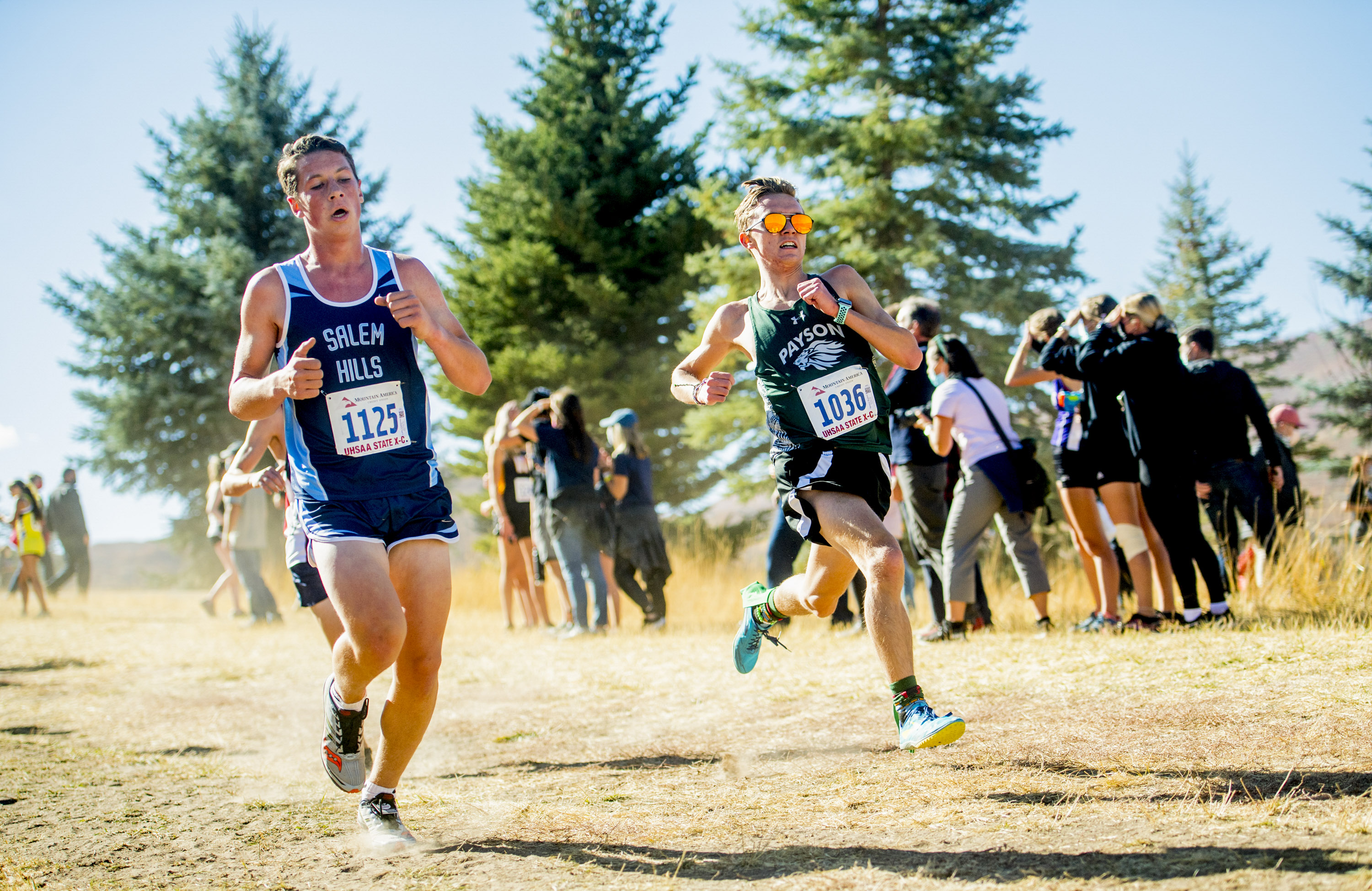 Payson’s Spencer Bennett makes his way down a hill beside Salem Hills’ Lane Lindstrom during the 5A boys race of the UHSAA State Cross Country Championships held at Soldier Hollow in Midway on Thursday, Oct. 22, 2020. 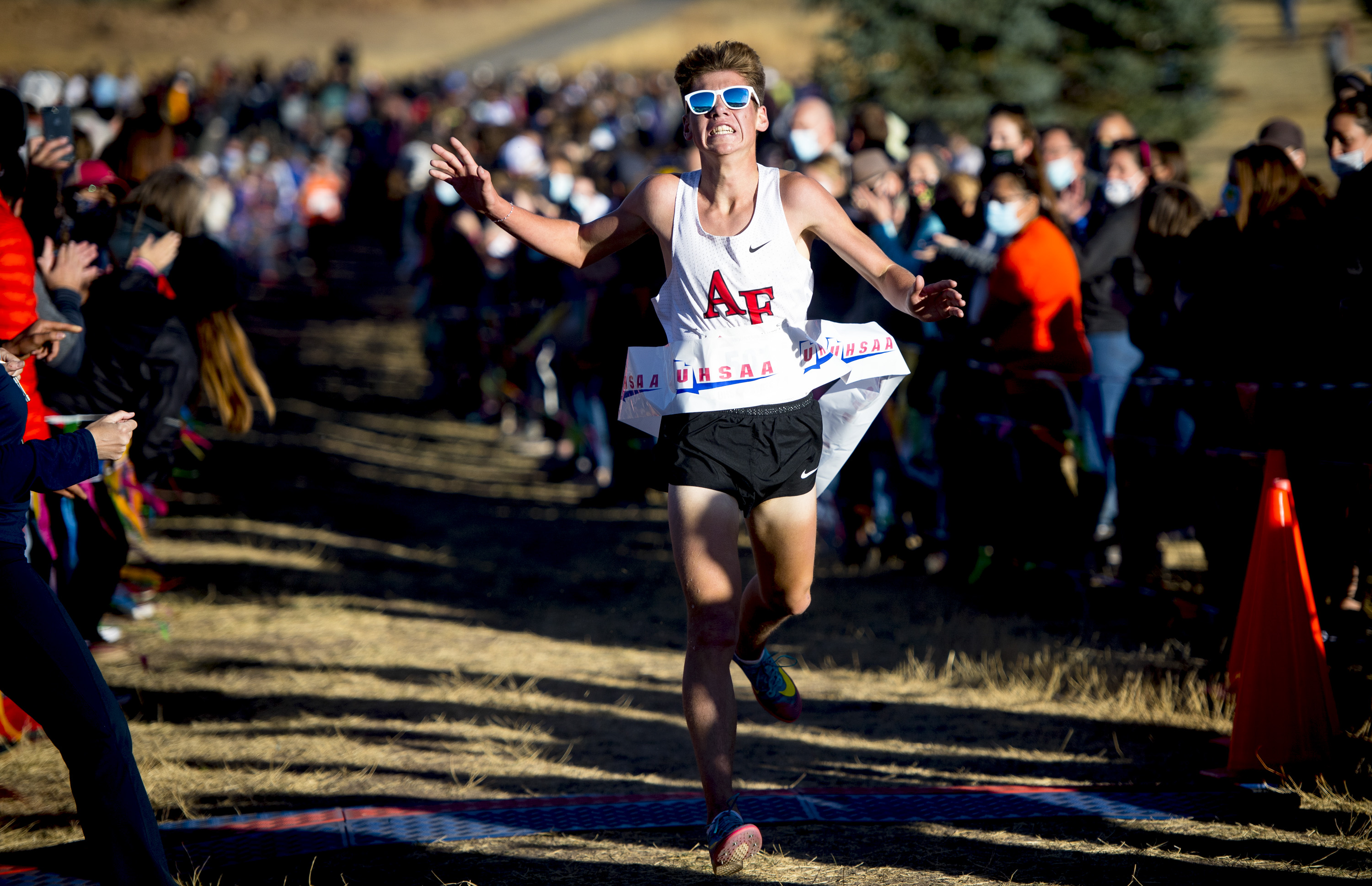 American Fork’s Nathan Jaster crosses the finish line in first place with a time of 16:09.8 during the 6A boys race of the UHSAA State Cross Country Championships held at Soldier Hollow in Midway on Thursday, Oct. 22, 2020. 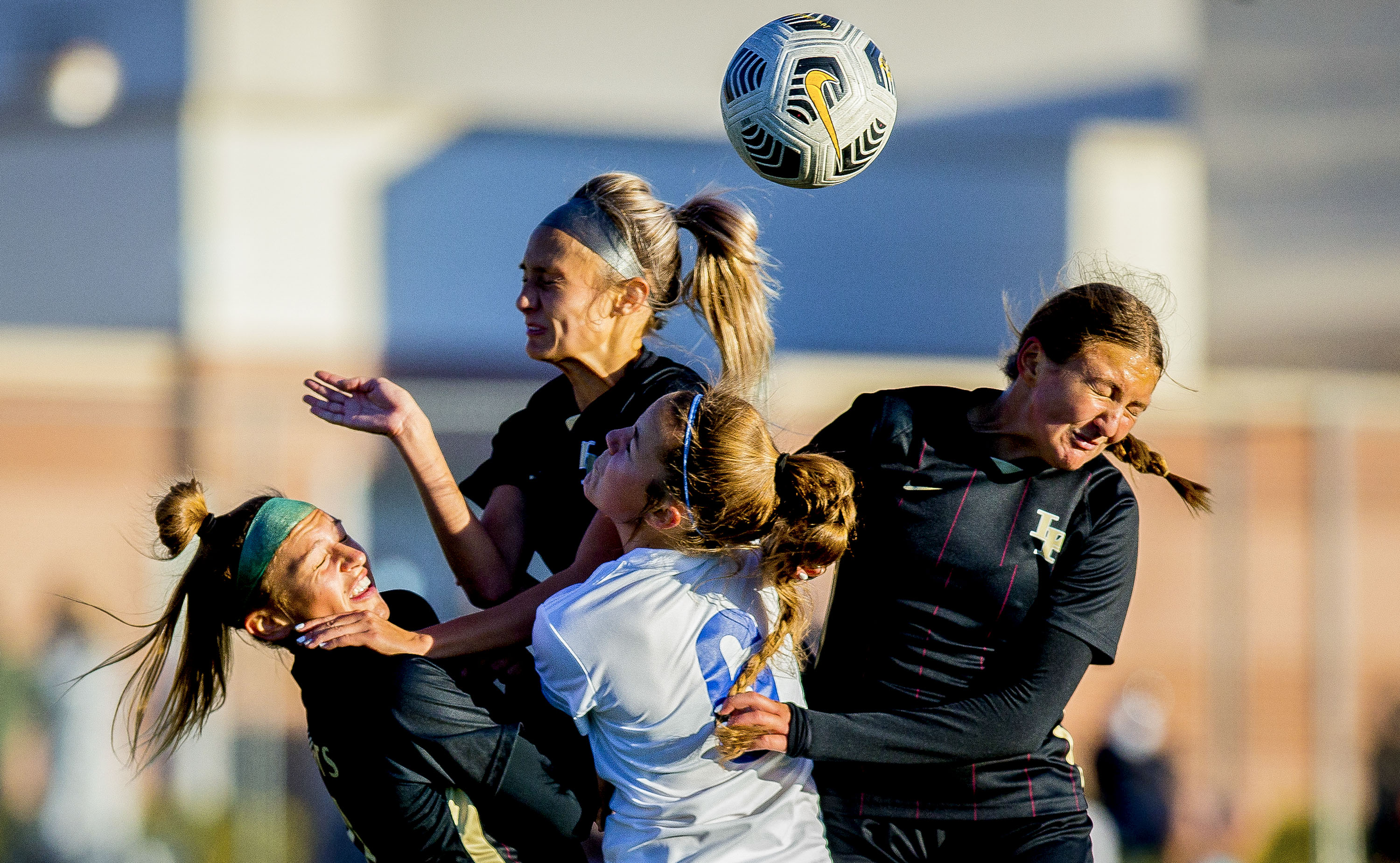 Lone Peak midfielder Skyler Matthews, center, heads the ball while midfielder Camryn Jorgensen, left, forward Elle Young (2) and Fremont defender Jamie Elliott (6) all seek to do the same during a game in the quarterfinals of the 6A state tournament between the Lone Peak Knights and the Fremont Silverwolves held at Lone Peak High School in Highland on Thursday, Oct. 15, 2020. 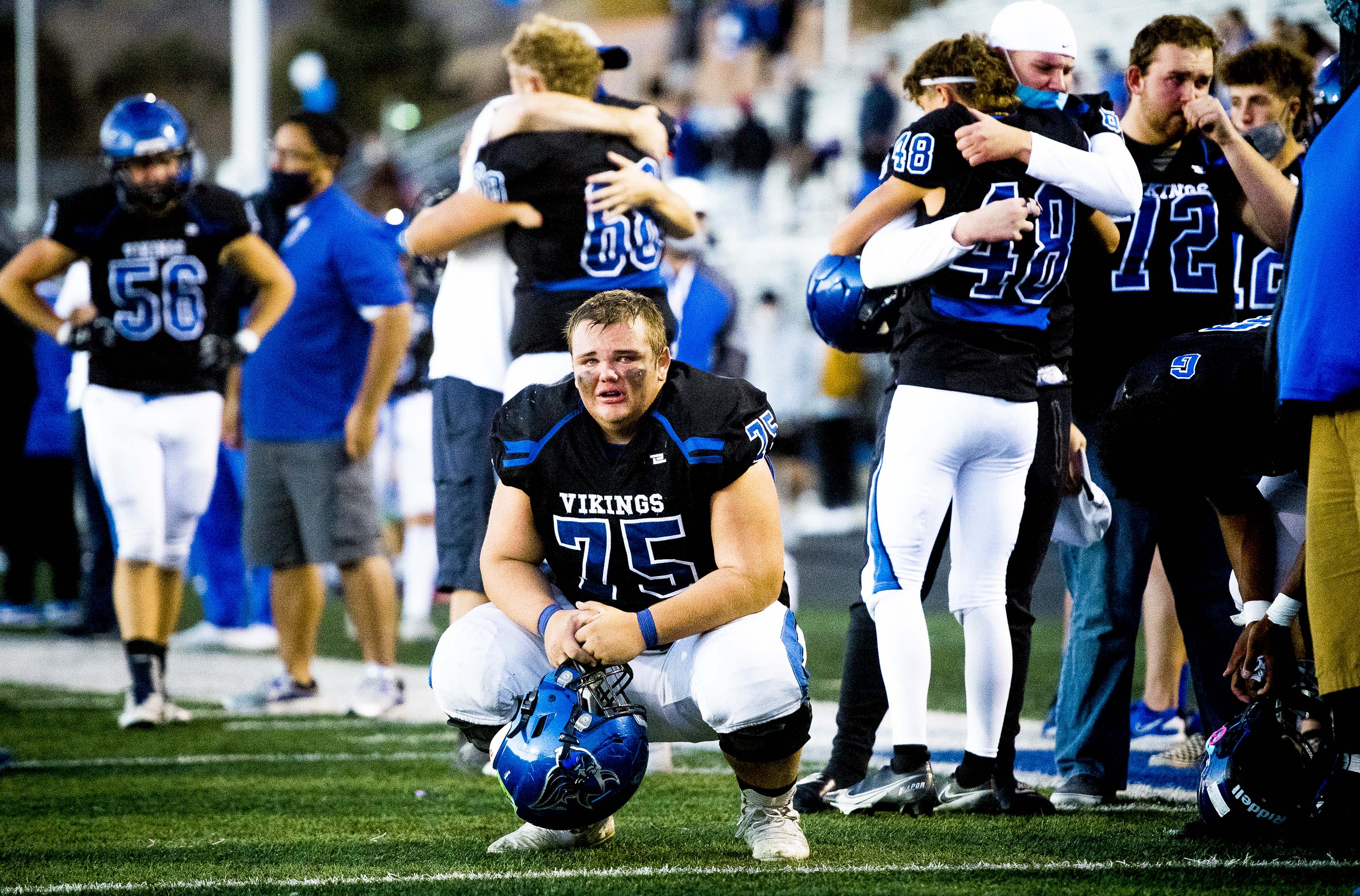 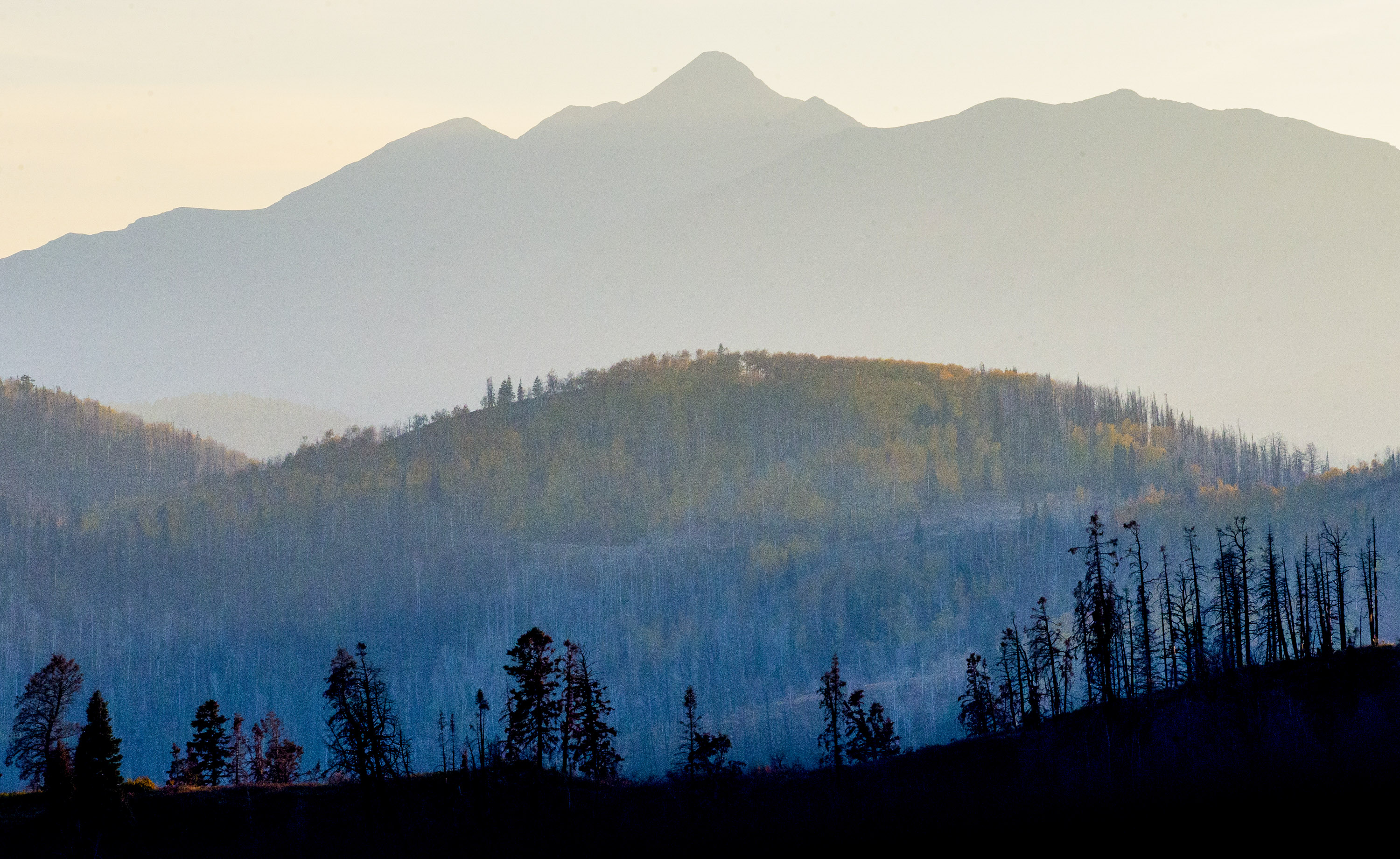 Wildfire smoke lingers in the air while living trees and those burned by wildfires stand intermixed as seen from the Mount Nebo Scenic Byway in southern Utah County on Monday, Oct. 5, 2020. Despite regularly appearing on lists of cities with the worst air pollution in the country, Provo’s air quality is improving over the long run. That’s according to a new study that found air pollution in the Provo-Orem metropolitan area, as well as in other parts of Utah, has declined in the past decade “as a result of the Clean Air Act and modern pollution control technologies.” 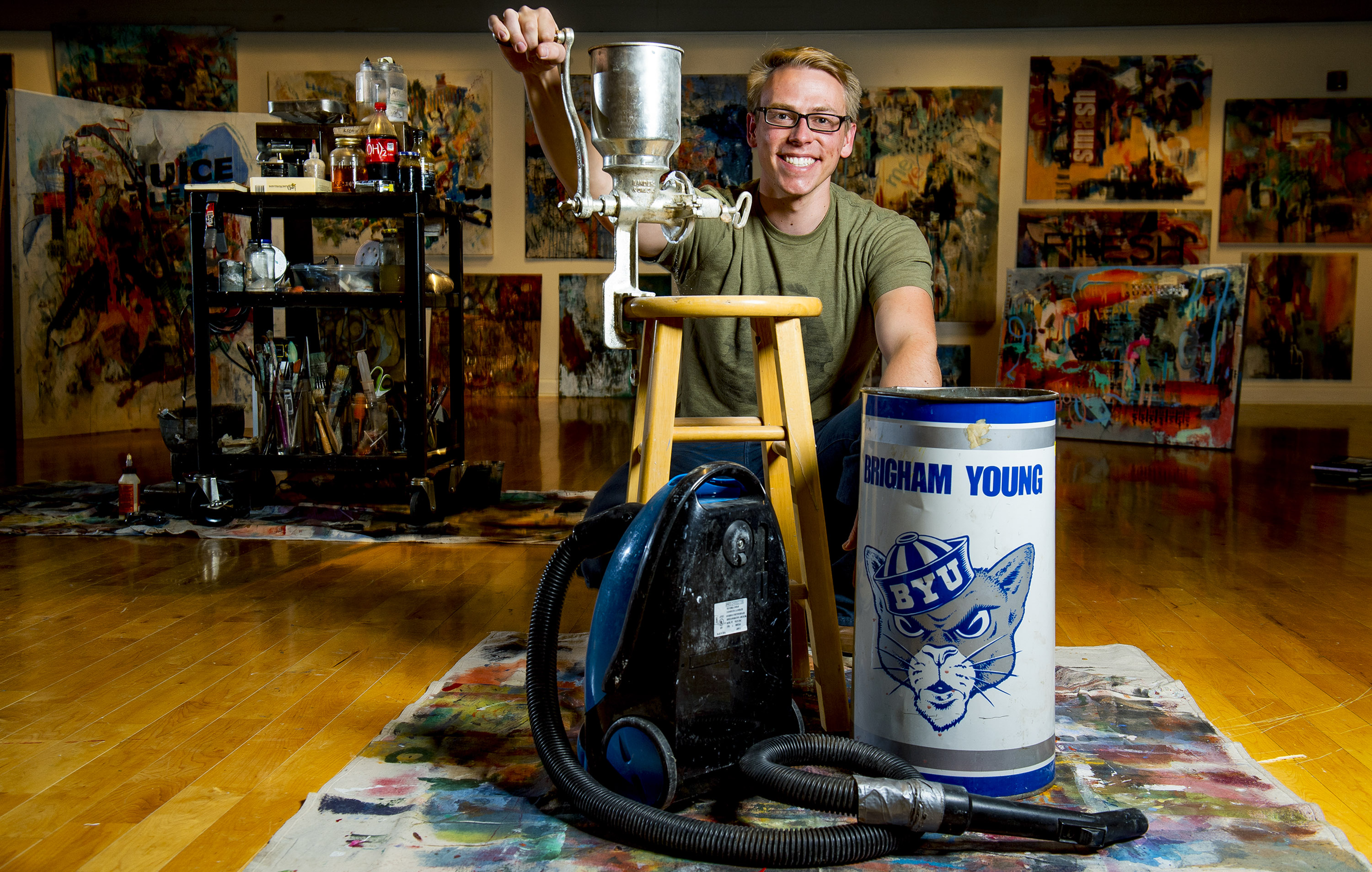 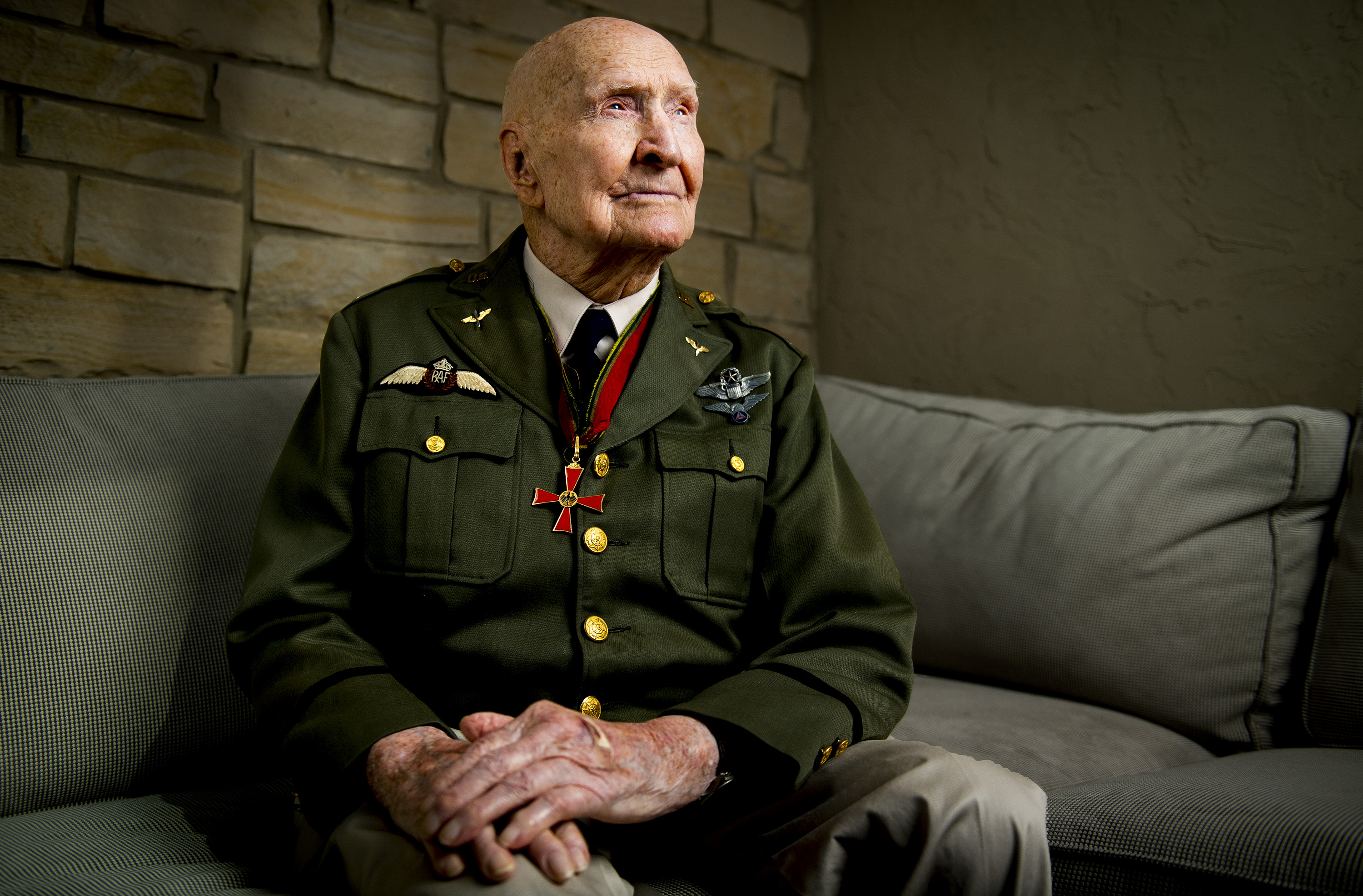 Gail Halvorsen, also know as the "Candy Bomber," poses for a portrait at his son’s home in Midway, Utah, on Wednesday, Oct. 7, 2020. Halvorsen was born on Sunday, October 10, 1920, and is celebrating his 100th birthday on Saturday. Halvorsen earned his nickname by air-dropping candy to kids during the Berlin Airlift after World War II from 1948 to 1949.